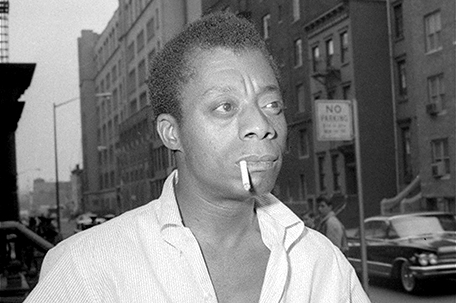 “To be a Negro in this country and to be relatively conscious is to be in a rage almost all the time.”  –James Baldwin

Novelist, essayist, playwright, poet, revolutionary, social critic, and Black man — these are just some of the many reasons James Baldwin is historically such a revered human being.  From witnessing the state of Black America suffering throughout the Civil Rights Movement, to the offensive depicting of Blacks in advertisements, Baldwin became very outspoken in his quest to heal and inspire change for all.

Last weekend, Philadelphia celebrated his legacy at the James Baldwin Celebration, a three-day festival ran by the Saturday Free School held in North Philadelphia’s Church of the Advocate. Music was enjoyed, speakers presented their ideas and read some of his timeless works aloud, and films were shown, including the Oscar-nominated Raoul Peck documentary “I Am Not Your Negro.” 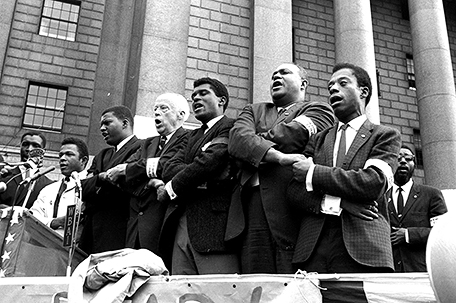 Civil rights leaders clasp hands as they sing during the closing of memorial ceremonies in New York, Sept. 22, 1963, for four girls killed in the bombing of the Birmingham, Ala., Sixteenth Street Baptist Church. From right, are: author James Baldwin; James Farmer, president of the Congress of Racial Equality; unidentified man; and veteran Socialist leader Norman Thomas. (AP Photo/Jacob Harris)

Some might wonder why there is a resurgence of this artist’s works, but there is no time like the present.  The documentary “I Am Not Your Negro,” reveals in vivid detail, Baldwin’s thoughts and feelings surrounding Black life through his own experiences, as well as after the deaths of Medgar Evers, Malcolm X, and Martin Luther King.  Some scenes may disturb the viewer and make them uncomfortable, but part of the very problem is that comfort zones create complicity and inaction.  Baldwin mentions at one point in the film that we are in fact not living in a “post racial society,” a term revitalized after the inauguration of 44th president Barack Obama.  In an Feb. 2017 article from The New York Times, reviewer A.O. Scott wrote: “Baldwin could not have known about Ferguson and Black Lives Matter, about the presidency of Barack Obama and the recrudescence of white nationalism in its wake, but in a sense he explained it all in advance. 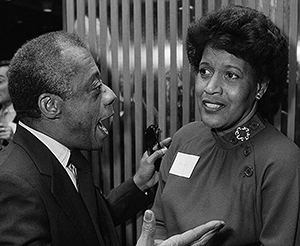 Writer James Baldwin chats with Myrlie Evers, widow of civil rights activist Medgar Evers, after they attended a screening of the film, “For Us, The Living: The Medgar Evers Story,” in New York, March 3, 1983. (AP Photo/Mario Suriani)

He understood the deep, contradictory patterns of our history, and articulated, with a passion and clarity that few others have matched, the psychological dimensions of racial conflict: the suppression of Black humanity under slavery and Jim Crow and the insistence on it in African-American politics and art; the dialectic of guilt and rage, forgiveness and denial that distorts relations between Black and White citizens in the North as well as the South; the lengths that White people will go to wash themselves clean of their complicity in oppression.”

Baldwin became uncomfortable watching the state of America burning on a screen or through articles while he was an ocean away enjoying his Blackness in Europe as a expat.  He was so uncomfortable, he came back and entered the trenches with close friends to find a solution to the damage Black Americans experienced since being brought here against their will.

As both a writer and an avid reader, Baldwin was able to express his thoughts and emotions with an ease unbeknownst to most.  His speech was at times complicated, but always right on time and remains true some 30 years after his death in 1987.  Through his words, you can feel embers of frustration, fatigue with the way things were, and a deep passion to reach his people, to love and heal them, to educate them, and be unapologetic in their quest for dignity and consciousness. 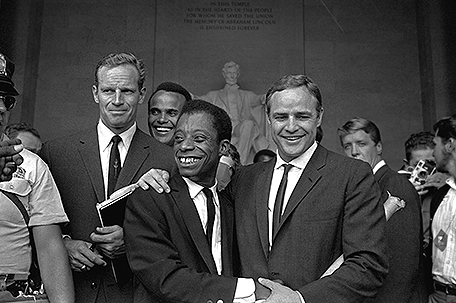 Actor Marlon Brando, right, poses with his arm around James Baldwin, author and civil rights leader, in front of the Lincoln statue at the Lincoln Memorial, August 28, 1963, during the March on Washington demonstration ceremonies which followed the mass parade. Posing with them are actors Charlton Heston, left, and Harry Belafonte. (AP Photo)

While he expresses these emotions, he also acts as a psychologist to a certain extent, breaking down America and why it is the way it is, offering the understanding of ‘what happened to you’ as opposed to finalizing the story through incessant racial tensions.  He deeply wanted to understand all spectrums of thought rather than a few.  Through this lens, he has inspired more than Black Americans–including, doctoral candidate Archishman Raju, who organized the James Baldwin Celebration.

At one time, Baldwin gave talks all over the world getting folks to understand struggles of Blacks through the American lens and to possibly change their perception based on these facts.  He should forever be celebrated — whether it’s through the Black Panthers or the Black Lives Matter movement.  His life, legacy, and activism will forever be relevant to the state of the world because the struggle will forever live on whether it is addressing gender equality, immigration rights, apartheid, or anti-colonialism.  Baldwin’s words serve as one of the many guidelines for 21st century activists to follow and hold dear, because in this day and time there are constant reminders that the work is not finished.