Ivory Coast rebounds from terrorist attack with unity and music: “We Are Not Afraid” 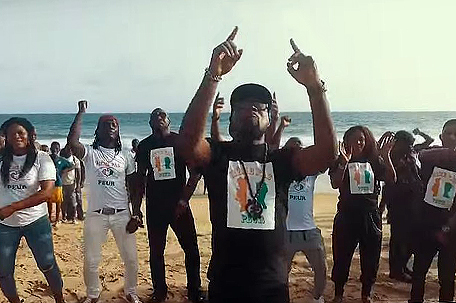 It was the March 13 terrorist attack that didn’t receive much media attention.

It was a beautiful Sunday afternoon on the popular Grand-Bassam beach resort in Abidjan, Ivory Coast. Ivoirians and tourists were enjoying the sun and cool relief that only the ocean can bring.

Vacationers in the West African country didn’t know an enemy was in their midst. One of whom had a drink at the bar before participating in the attack.

There were also grenade attacks at three nearby hotels.

“They killed a child despite him kneeling down and begging,” according to the BBC.

“One tourist grabbed her baby and ran to the bathroom for cover.”

An Islamic group has claimed responsibility for the attack.

In addition to Ivoirians, citizens from Burkina Faso, Cameroon, Mali and Germany were among the victims.

“These cowardly attacks by terrorists will not be tolerated,” said Ivory Coast President Alassane Outtara who came to the resort a few hours after the attack.

The most recent report is that 15 people are in custody and that two more persons in connection with the attack have been arrested in northern Mali—one of Ivory Coast’s neighboring countries.

Amidst terrorist attacks not only in Ivory Coast but also in neighboring West African countries, Ivoirian musicians banded together sending a message via music.

A music group called Collectif Bassam along with local youth and hotel workers made a music video “Meme Pas Peur” meaning “We are not scared” at the site of the tragedy. The song sends the message that Ivoirians are back are on their feet.

Ivoirians are resilient and determined not to let the recent attack stop them from moving forward as one nation.

• The Basilica of Our Lady of Peace in the Ivory Coast capital of Yamoussoukro is the largest church building in the world covering 323,000 sq ft.

• The country has two capitals.  Yamoussoukro is the political and administrative capital. Abidjan  is the nation’s economic capital.

• For more than 30 year after gaining independence from France in 1960,  Ivory Coast was known for its prosperity and religious and ethnic harmony serving as a model West African nation.