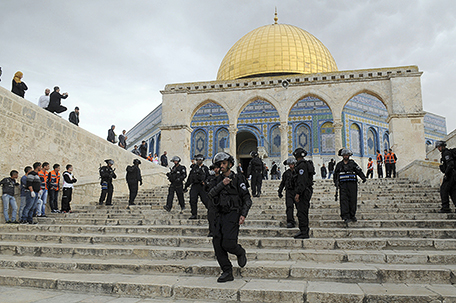 Police spokesman Micky Rosenfeld said the crowd hurled stones and firecrackers from atop the compound known to Jews as the Temple Mount, the holiest site in Judaism. Rosenfeld said police then entered the site and dispersed the group with tear gas and other non-lethal means.

The compound is known to Muslims as the “Noble Sanctuary” and is Islam’s third-holiest site. Israel captured the area along with the rest of east Jerusalem from Jordan in the 1967 war.

Clashes often erupt at the site.

Jews typically pray below, at the Western Wall, but tensions have grown lately with an increased number of Jews arriving to pray at the Temple Mount as well. Israel permits Jews to ascend to the Temple Mount for visits, but they are barred from praying at the site. These visits often stoke rumors that Israel is preparing to take over the site.

Sheikh Azzam Tamimi, head of the Waqf, the Islamic authority that manages the site, said worshippers had barricaded themselves inside the Al-Aqsa Mosque “to defend” the site from Jewish groups. Israeli TV stations showed footage of police running across the compound in riot gear with piles of stones strewn on the ground. The entrance to a mosque was barricaded with furniture, as protesters inside threw objects toward police. Tamimi said 30 people suffered from tear gas inhalation or had been struck by rubber-coated bullets. None of the injuries appeared to be serious.

Jews flock to the Western Wall during the weeklong Passover holiday. Police closed access to the adjacent Temple Mount compound after Wednesday’s clash.

The site is ground zero in the territorial and religious conflict between Israel and its Arab neighbors. Its gold-topped Dome of the Rock enshrines the rock where Muslims believe the Prophet Muhammad ascended to heaven.

Jews believe the compound is the site where the two biblical Jewish Temples stood – and where religious Jews pray a third Temple will one day be built. The site is so holy that Jews have traditionally refrained from praying on the hilltop, but attitudes among some Orthodox Jews have been evolving and there has been growing demand to allow Jews to pray there freely as well.

The Palestinians claim east Jerusalem, including the Old City, as the capital of their future state. The status of the site remains perhaps the most sensitive and explosive issue in U.S.-brokered peace talks.

Tensions have already been rising due to a breakdown in peace talks and the deadly shooting this week of an Israeli policeman who was on his way to celebrate the Passover holiday with relatives in the West Bank.

Abbas’ spokesman, Nabil Abu Rdeneh, said the visit showed that there are “glimpses of hope” for peace. He also said that Abbas condemns “violence by anyone against anyone.”

The current round of peace talks is set to end on April 29. After nearly nine months of fruitless negotiations, U.S. mediators have been trying to win an agreement to extend the talks beyond the current deadline.

A meeting between the sides was canceled Wednesday while they waited for American mediator Martin Indyk to return from a brief break in the U.S, a Palestinian official said. The official, speaking on condition of anonymity because of a pledge to the Americans not to discuss the negotiations, said talks were expected to resume Thursday after Indyk’s return.

Meanwhile in Gaza, Hamas’ health ministry spokesman Ashraf Al-Kidra said three Palestinians were killed in a large explosion, which appeared to have been triggered by militants mishandling explosives. All three were members of the Hamas militant wing.