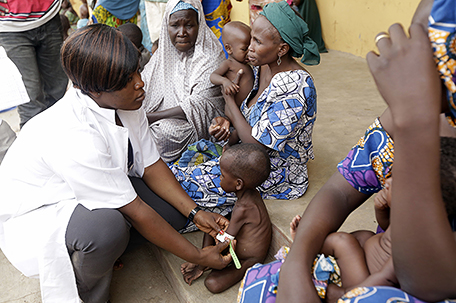 ABOVE PHOTO:  In this Sunday, May 3, 2015 file photo, a doctor attends to a malnourished child as women and children rescued by Nigerian soldiers wait to receive treatment at a refugee camp in Yola, Nigeria. The United Nations is suspending aid to dangerous areas of Nigeria’s northeastern Borno state, where it says a half million people are starving, after Boko Haram ambushed a humanitarian convoy. Three civilians including a UNICEF employee and contractor for the International Organization for Migration were wounded in Thursday’s July 28, 2016 ambush, along with two of the soldiers escorting the humanitarian workers, according to the Nigerian army and the U.N. Children’s Fund.  (AP Photo/Sunday Alamba file)

By Michelle Faul and Maggie Michael

LAGOS, Nigeria — Nigeria’s Boko Haram Islamic extremists have a new leader who promises to end attacks on mosques and markets used by Muslims, according to an interview published Wednesday by the Islamic State group.

The report did not say what Shekau’s current status is.

The interview with al-Barnawi indicates a major change in strategy for the Nigerian extremists, who have attacked mosques with suicide bombers and gunmen, blown up suicide bombers in crowded marketplaces and killed and kidnapped school children. The targeting of students accounts for its nickname Boko Haram, which means Western education is sinful or forbidden.

Wednesday’s announcement indicates a coup by Boko Haram breakaway group Ansaru against Shekau, and follows a trend of extremist Islamic groups moving away from al-Qaida to the Islamic State, analyst Jacob Zenn said.

Ansaru broke away from Boko Haram because it disagrees with the indiscriminate killing of civilians, especially Muslims.

Al-Barnawi is the pseudonym of a Nigerian journalist allied with Ansaru, which is known for kidnapping foreigners, according to Zenn.

Shekau in March 2015 declared that Boko Haram had become the Islamic State’s West Africa Province. At the time, Boko Haram was the most powerful military force in northeast Nigeria, controlling a huge area and better equipped and motivated than Nigerian forces.

Under Shekau, the seven-year insurgency spread to neighboring countries, killed more than 20,000 people and driven more than 2.2 millon from their homes, creating what aid workers have called a catastrophic humanitarian emergency.

Since last year, Nigeria has a new leader, President Muhammadu Buhari, a former military dictator who has better armed and motivated security forces. He is also fighting corruption that diverted some $2.1 billion that was meant to buy weapons to fight the Islamic uprising, and is cooperating with a multinational force that has the extremists on the run.

In the interview, al-Barnawi said that under his leadership the militants will work to seize back territory. He claimed that increasing numbers of youth are joining the cause, though Nigeria’s military reports that hundreds of its fighters have surrendered as aerial bombardments and ground assaults cut supply routes.