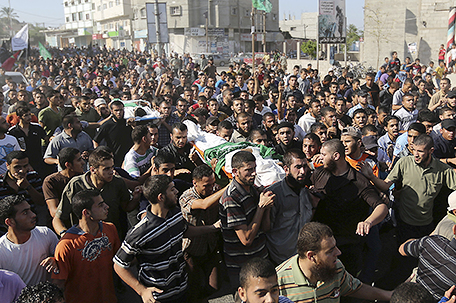 ABOVE PHOTO: Palestinians carry bodies of the Ezz Al-Din Al Qassam Brigades members who were killed in an airstrike, during a funeral in Rafah, southern Gaza Strip on Monday, July 7, 2014. The Islamic militant group Hamas that rules Gaza vowed revenge on Israel for the death of several of its members killed in an airstrike early Monday morning in the deadliest exchange of fire since the latest round of attacks began weeks ago.  (AP Photo/Hatem Moussa)

MOGADISHU, Somalia — Islamic militants stormed the presidential palace in the Somali capital of Mogadishu on Tuesday, sparking heavy gunfire as government troops and guards tried to repel them.

Loud explosions could be heard inside the heavily fortified compound, which has been the subject of many attacks by al-Qaida-linked militants over the years.

The attack late Tuesday is the second assault on the presidential palace this year, and it marked the first time militants have been able to breach the compound and take offensive positions inside.

The presidential palace is protected by government troops and African Union peacekeepers who helped to drive the al-Shabab militants out of their bases in Mogadishu in 2011. However it was not known if the peacekeepers were involved in Tuesday’s fighting.

The attack started when a car bomb exploded outside the presidential compound. Gunmen then entered the palace, police officer Mohamed Abdi told The Associated Press.

Somali President Hassan Sheikh Mohamud was not inside the palace at the time of the attack, but the prime minister and the speaker of parliament were, said Capt. Mohamed Hussein, a senior police official. Hussein said the militants, who were armed with grenades, split up into groups once inside and tried to take control of different buildings in the compound.

“The operation is still under way,” he said, referring to efforts to repel the militants.

No more details were immediately available, but the attack is widely believed to have been carried out by the Islamic extremist group al-Shabab, which has vowed to step up attacks during the Muslim holy month of Ramadan.

Al-Shabab militants have previously carried out deadly attacks against lawmakers, U.N. staff, government officials and last year on an upscale mall in Nairobi, the capital of neighboring Kenya.

Militants killed four people Saturday when a car laden with explosives blew up near the parliamentary building in Mogadishu.