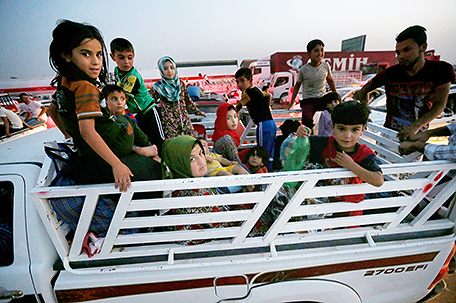 ABOVE PHOTO:  Fleeing Iraqi citizens from Mosul and other northern towns sit in a pick up truck waiting to cross, in the Khazer area between the Iraqi city of Mosul and the Kurdish city of Irbil, northern Iraq, Wednesday June 25, 2014. Sunni insurgents who seized Iraq’s second largest city attacked a nearby Christian village on Wednesday, bringing their fight closer to the largely Kurdish regions of northern Iraq which had remained so far largely untouched from the chaos sweeping the country. (AP Photo/Hussein Malla)

By Sinan Salaheddin and Diaa Hadid

BAGHDAD — Iraq’s vice president called on parliament Thursday to convene next week, taking the first step toward forming a new government to present a united front against a rapidly advancing Sunni insurgency as a bombing killed 12 people in a Baghdad Shiite neighborhood and police found eight more bullet-riddled bodies south of the capital.

Britain’s top diplomat, visiting Iraq, urged its leaders to put aside their differences for the good of the nation. And in Paris, Secretary of State John Kerry met with the United States’ top Sunni state allies in the Mideast to consider how to confront the growing turmoil.

Prime Minister Nouri al-Maliki’s Shiite-led political bloc won the most seats in April 30 elections – with 92 seats out of the 328 – but he needs support from other parties for a majority that would give him the right to govern. An increasing number of critics, both in Iraq and abroad, now want him to step down, saying his failure to promote national reconciliation fueled the insurgency by needlessly angering minority Sunnis.

Iraq’s powerful Shiite cleric Muqtada al-Sadr made a televised statement late Wednesday in which he called for a national unity government of “new faces” representing all groups.

Al-Sadr, whose followers fought fiercely against both U.S. forces and Sunni extremists during the height of the war nearly a decade ago, also vowed to “shake the ground” under the feet of the al-Qaida breakaway group that has threatened to advance toward Baghdad and holy Shiite cities in the south.

Some Iraqi politicians favor forming an interim government that could provide leadership until a more permanent solution can be found. Al-Maliki, however, has insisted the constitutional process must be allowed to proceed.

In a statement, Vice President Khudeir al-Khuzaie ordered the new parliament to hold its first session on Tuesday, to be chaired by the eldest member.

Constitutionally the next step would be to elect a speaker and two deputies, then within 30 days to choose a new president who then has 15 days to ask the largest bloc to choose a prime minister and form the new government. The prime minister-designate has 30 days to present his cabinet to the parliament.

British Foreign Secretary William Hague, meeting with al-Maliki in Baghdad, told a news conference that “we believe the urgent priority must be to form an inclusive government … that can command the support of all Iraqis and work to stop terrorists and their terrible crimes.”

Hague’s trip follows a visit by Kerry, who earlier this week delivered a similar message and warned that Washington is prepared to take military action even if Baghdad delays political reforms.

The intense diplomatic push underscores the growing international concern over the gains by fighters led by the Islamic State of Iraq and the Levant, the Sunni extremist group that has seized large swaths of Iraq and seeks to carve out a purist Islamic enclave across both sides of the Syria-Iraq border.

In Paris, Kerry said the threat posed by the Islamic State reaches beyond the two countries – Iraq and Syria – where it is currently based.

“The move of ISIL concerns every single country here,” Kerry said at the start of the meeting held at the U.S. ambassador’s residence. He said his talks with foreign ministers from Jordan, Saudi Arabia and the United Arab Emirates also would touch on a “number of critical issues.”

The Arab diplomats did not commit to sending any military assistance to Baghdad to fight the Sunni insurgency, as the U.S. is doing. In Washington, the Pentagon said Thursday that four teams of Army special forces have arrived in Baghdad, bringing the number of American troops there to 90.

The U.S. special forces will be advising and assisting Iraqi counterterrorism forces to repel the insurgency. U.S. officials said they will be in operations centers in Baghdad and northern Iraq.

The Obama administration hopes that Iraq’s Sunni neighbors – notably Jordan and Saudi Arabia – will use their cross-border tribal networks to bolster the Sunni militias helping to fight ISIL with financing or weapons. But it’s not clear that Washington would even support that privately. The U.S. probably would want to vet the tribes before they received any money or arms, even from other nations, to ensure that the aid does not get passed along to ISIL or other extremist groups.

In Iraq, the discovery in recent weeks of bullet-riddled bodies dumped on the streets also has raised the specter of a return to all-out sectarian warfare.

On Thursday, authorities found eight men believed to be in their 30s and 40s who had been shot to death in Mahmoudiya, about 30 kilometers (20 miles) south of Bagdad, police and hospital officials said, speaking on condition of anonymity because they weren’t authorized to release the information. The men had no ID cards with them, reminiscent of the past when Shiite and Sunni extremists would take the identification to dehumanize those killed or to use as trophies.

Shortly before sunset, a bomb exploded near a clothing shop in Baghdad’s northern Shiite neighborhood of Khazimiyah, killing 12 people and wounding 32, said police and hospital officials.

In northern Iraq, an insurgent artillery offensive against Christian villages on Wednesday sent thousands of people fleeing from their homes, seeking sanctuary in the Kurdish enclave. The shelling of the cluster of villages happened in an area known as Hamdaniya, 45 miles (75 kilometers) from the frontier of the self-ruled Kurdish region.

While many villagers appeared to have been granted access by daybreak, hundreds of Shiite refugees were still hoping to be let in but were facing delays at a checkpoint because they lacked sponsors on the other side.

One of the refugees, who gave only her nickname of Umm Alaa, fearing retribution, said she and hundreds of others left their village of Quba and a nearby hamlet during the militants’ initial assault on June 10 to seek shelter in communities that were then attacked Wednesday.

Another, who agreed to be identified only as Huda, tried to calm her 10-year-old son Mohammed, who was thirsty and crying.

“They will kill every Shiite man, and they will burn every Shiite house,” Huda said. “Nobody has stayed in Quba. Every single Shiite has left.”