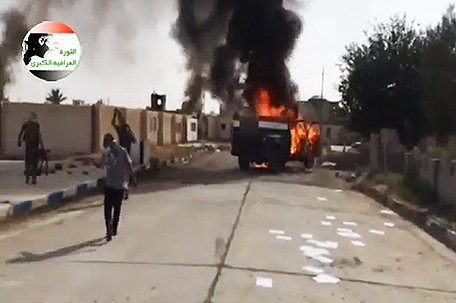 ABOVE PHOTO:  This image made from video posted by Iraqi Revolution, a group supporting the al-Qaida breakaway Islamic State of Iraq and the Levant (ISIL) on Wednesday, June 11, 2014, which has been verified and is consistent with other AP reporting, shows militants on Al-Sharqat base north of Tikrit, Iraq.   (AP Photo/Iraqi0Revolution via AP video)

BAGHDAD — The al-Qaida-inspired group that led this week’s charge in capturing two key Sunni-dominated cities in Iraq vowed Thursday to march on to Baghdad, raising fears about the Shiite-led government’s ability to slow the assault following lightning gains.

Signs emerged that the Islamic State of Iraq and Levant is backed in its campaign by former military officers and other members of ousted dictator Saddam Hussein’s regime – including a force led by Izzat Ibrahim al-Douri, the late leader’s former deputy who escaped the 2003 U.S.-led invasion and eluded U.S. and Iraqi forces ever since.

In the north, Kurdish security forces took over an air base and other posts abandoned by the Iraqi military in ethnically mixed Kirkuk, a senior official with the Kurdish forces said. He denied they had taken over the oil-rich city.

Prime Minister Nouri al-Maliki asked parliament this week to declare a state of emergency that would give him increased powers to run the country, but the lawmakers Thursday failed to assemble a quorum to do so.

As world leaders expressed alarm over the destabilization of large parts of the country by fighters from the militant group known as the Islamic State of Iraq and the Levant, the U.N. Security Council scheduled consultations on the crisis.

The Islamic State aims to create an Islamic emirate spanning both sides of the Iraq-Syria border. It has been able to push deep into parts of the Iraqi Sunni heartland once controlled by U.S. forces because police and military forces melted away after relatively brief clashes.

Two senior intelligence officials told The Associated Press that an armed group led by al-Douri, the Naqshabandi Army, and other Saddam-era military figures joined the Islamic State in the fight. In Saddam’s hometown of Tikrit that was overrun by militants Wednesday, witnesses said fighters raised posters of Saddam and al-Douri. The two officials spoke on condition of anonymity because they were not authorized to talk to the press.

The involvement of Saddam-era figures raises the potential to escalate the militants’ campaign to establish an al-Qaida-like enclave into a wider Sunni uprising. That could only further the momentum toward turning Iraq’s sectarian and ethnic divisions in to a geographical fragmentation.

The Islamic State issued a triumphalist statement declaring that it would start implementing its strict version of Shariah law in Mosul and other regions it had overrun. It said women should stay in their homes for modesty reasons, warned it would cut off the hands of thieves and told residents to attend daily prayers. It told Sunnis in the military and police to abandon their posts and “repent” or else “face only death.”

“People, you have tried secular regimes … This is now the era of the Islamic State,” it proclaimed.

Baghdad does not appear to be in imminent danger of a similar assault, although Sunni insurgents have stepped up car bombings and suicide attacks in the capital recently.

With its large Shiite population, the capital would be a far harder target for the militants. So far, Islamic State fighters have stuck to the Sunni heartland and former Sunni insurgent strongholds where people are already alienated by al-Maliki’s Shiite-led government over allegations of discrimination and mistreatment. The militants also would likely meet far stronger resistance, not only from government forces but by Shiite militias if they tried to advance on Baghdad.

Iraqi officials and analysts said the ISIL assault is being helped by sympathetic Sunnis, including former army officers and other remnants of Saddam’s regime, which fell after the 2003 U.S.-led invasion.

Skirmishes continued in several areas overnight and into Thursday. Two communities near Tikirt – the key oil refining center of Beiji and the city of Samarra, home to a prominent Shiite shrine – remained in government hands, according to Iraqi intelligence officials.

They said ISIL fighters managed to take control of two big weapons depots holding some 400,000 items, including AK-47 rifles, rockets and rocket-propelled grenades, artillery shells and mortars. A quarter of the stockpiles were quickly sent to Syria in order to help the group’s comrades there, they said.

Officers from the army that was disbanded after the invasion are helping coordinate the fight with the Islamic State, they said. Other armed groups involved in the attacks include the Army of the Men of the Naqshabandi Order, which is led by the top fugitive from Saddam’s regime, Izzat al-Douri, and another known as the Iraqi Resistance Group, they said.

The officials provided the information on condition of anonymity because they were not authorized to divulge it publicly.

After Mosul fell Tuesday, al-Maliki asked parliament to give him the “necessary powers” to run the country under a state of emergency – something legal experts said would include powers to impose curfews, restrict public movements and censor the media.

After parliament failed to reach a quorum, Hakim al-Zamili, a lawmaker affiliated with firebrand Shiite cleric Muqtada al-Sadr, played down the apparent lack of support for the vote, saying al-Maliki already has enough power to take the necessary action.

The Islamic State’s spokesman vowed to take the fight into Baghdad. In a sign of the group’s confidence, he even boasted that its fighters will take the southern Shiite cities of Karbala and Najaf, which hold two of the holiest shrines for Shiite Muslims.

“We will march toward Baghdad because we have an account to settle there,” he said in an audio recording posted on militant websites commonly used by the group. The statement could not be independently verified.

Meanwhile, Kurdish fighters from the ethnic group’s autonomous enclave in the north showed signs of taking a greater role in fighting back against the Islamic State. Their role is a potential point of friction because both Sunni and Shiite Arabs are wary over Kurdish claims on territory outside their enclave.