International team to investigate reports of deadly violence in Congo 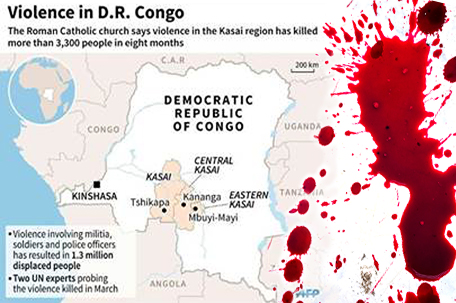 The U.N.’s Human Rights Council has approved a resolution to send a team of experts “to establish the truth” about reports of thousands of deaths and the destruction of entire villages by government-backed soldiers in Congo’s central Kasai region.

U.N. rights chief Zeid Ra’ad al-Hussein had lobbied for the resolution at a meeting of the council. He presented details of men, pregnant women and babies being mutilated by a government-backed militia and insurgents.

After many hours of diplomatic wrangling, a resolution was reached. While it fell short of the “independent, international investigation” sought by the rights chief and backed by the European Union, the U.S. and others, it was supported by a group of African countries.

The new text calls for the team of international experts, including ones from the region, “to collect and preserve information to determine the facts and circumstances… in cooperation with the (DRC) government”.

The experts must forward their conclusions to the DRC authorities, the resolution says, stressing that “the perpetrators of deplorable crimes are all accountable to the judicial authorities of the Democratic Republic of the Congo”.

A comprehensive report on the team’s findings will be presented by the U.N. chief in the council’s main annual session in March next year.

Violence in the Kasai provinces erupted in September when security forces moved in against followers of a tribal chieftain Kamwina Nsapu — who had been killed a month earlier — rebelling against the increasing authority of the central government.

Despite a rash of deadly clashes and a general strike last fall when President Kabila announced he would remain in power after the end of his legal term, South African President Jacob Zuma took the occasion of a bilateral meeting to effusively praise the Congolese leader for what he considered the relative stability and progress being made in that vast central African nation.

Congolese President Joseph Kabila now says he had never “promised anything” about whether to hold elections in the DRC, seeming to back away from a deal to hold a vote this year.

The Democratic Republic of Congo will mark 57 years of independence on Friday, June 30. This year also marks the 20th anniversary of dictator Mobutu Sese Seko’s fall from power in 1997.

Congo clears the way for 72 adoptions after two-year wait