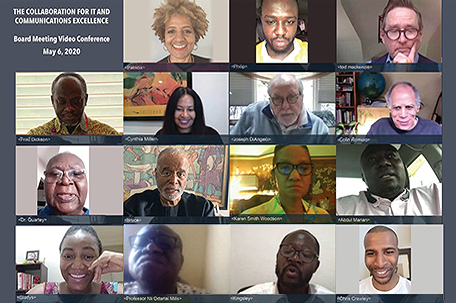 A group of business, professional, academic, civic and public-sector leaders from Northern and Southern Ghana, and across the U.S. recently convened by video conference, in the first, inter-continental organizational board meeting for The Collaboration for IT and Communications Excellence.

The attendees affirmed the non-profit organization’s mission statement, which is,  “To help Ghana’s students and entrepreneurs to become leaders in a tech-driven global economy,” and announced its executive committee, board members, and key staff members, all drawn from Greater Accra and from cities across the U.S.

In addition, board committees were formed and an ambitious schedule of first-year objectives were outlined for the organization, which was originally launched, in 2016, as a 501(c)3 entity — the Pennsylvania-incorporated African Bicycle Contribution Foundation.

In its new iteration, the foundation has initiated a process for incorporation in Ghana.

In a demonstration project in January 2020, the foundation donated a fully functional computer lab, including 10 laptop computers, related equipment, 20  headphones, and a 65” monitor to the students at the Girls Model School, in Nabdam District, located in Ghana’s Upper East Region.

In addition, when Collaboration leaders realized that usable desks that had previously been available to the general school population had been transferred into the computer lab, they also contributed 80 new, metal combination desks to the school.

In 2019, the IMF, in 2019, named Ghana the fastest-growing economy in the world. But even as early as 2007, following the publication of a Ghana Country Report, titled, “ICT in Education in Ghana,” the country’s Ministry of Education began to recognize that the future of Ghana’s economy would be directly dependent upon the ability of its basic-level students to adapt to new ICT curricula that were becoming foundational for facilitating the country’s ability to compete with tech-driven economies in Africa, and worldwide.

Since that time, Ghana has recognized that two primary resources would be indispensable to achieving its tech-related goals: a national availability of IT-certified classroom teachers, and student access to material resources, including computers, monitors, IT textbooks, power sources and Internet connectivity.

Indeed, in that same 2007 Ghana Country Report, author Kofi Mangesi identified four, key “inhibiting factors” that predated the ICT policy, many of which still pertain in 2020. They were:

•  Access to ICTs still remains highly inadequate and unevenly distributed through Ghana, with an urban bias;

•  The capacity of teachers and educators to deliver policy still remains low with many averse to adopting ICTs in the classroom or with inadequate skills;

•  A lack of adequate collaboration between the Ministry of Education and Ghana Education service or other implementation agencies such as ministries, departments, and agencies; and

• Inadequate partnerships and collaboration between the ministry and the private sector.

According to Crawley, the collaboration’s board chair, those challenges are perfectly matched with the objectives and diverse skill sets of the members of the foundation. “When we formed the new collaboration, foremost in our minds was that its mission would be best accomplished if we could generate full strategic cooperation between African and American leadership, in support of the Ministry of Education’s objectives,” Crawley said.

“That, we thought, would help to expedite the delivery of ICT advantages to the schools, and to the Ghanaian economy, as a whole.”

“We have worked diligently to create this new partnership,” vice-chair of the collaboration’s board, Dr. Quartey, said.  “Our agenda is designed to speed the delivery of critically important IT skills to under-resourced, rural Ghanaian students, and to our young entrepreneurs. We’ll all learn a great deal from one another, as we move this issue forward. It was time that we did so.”

As the International Finance Corporation opined in its 2018 report, “Digital Skills, Sub-Saharan Africa, Spotlight on Ghana,”:

“The labor market for digital skills in Sub-Saharan Africa, and specifically, Ghana, is already highly developed, and demand is expected to grow.”

“Foundational skills taught in school must include basic digital skills, at a minimum. Digital skills are now considered as essential for future work as reading, writing and math.”