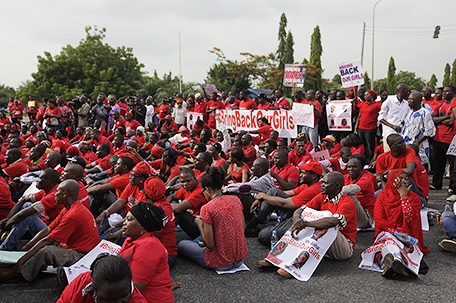 ABOVE PHOTO:  People attend a demonstration calling on the government to rescue the kidnapped girls of the government secondary school in Chibok, in Abuja, Nigeria, Thursday, May 22, 2014. Scores of protesters chanting “Bring Back Our Girls” marched in the Nigerian capital Thursday as many schools across the country closed to protest the abductions of more than 300 schoolgirls by Boko Haram, the government’s failure to rescue them and the killings of scores of teachers by Islamic extremists in recent years.   (AP Photo/Sunday Alamba)

ABUJA, Nigeria — Nigeria’s military chiefs and the president are apparently split over how to free nearly 300 schoolgirls abducted by Islamic extremists, with the military saying use of force endangers the hostages and the president reportedly ruling out a prisoner-hostage swap.

The defense chief, Air Marshal Alex Badeh, announced Monday night that the military has located the girls, but offered no details or a way forward. “We can’t go and kill our girls in the name of trying to get them back,” he said.

Previous military attempts to free hostages have led to the prisoners being killed by their abductors, including the deaths of two engineers, a Briton and an Italian, in Sokoto in March 2012.

A human rights activist close to mediators said a swap of detained extremists for the girls was negotiated a week ago but fell through because President Goodluck Jonathan refused to consider an exchange. The activist spoke to The Associated Press on condition of anonymity because the activist is not permitted to speak to press.

Britain’s Minister for Africa, Mark Simmonds, said two weeks ago that the Nigerian leader had told him categorically he would not consider a prisoner swap.

Community leader Pogu Bitrus of Chibok, the town from which the girls were abducted on April 15, says authorities are speaking with “discordant voices” and the president appears under pressure to negotiate.

“The pressure is there if his own lieutenants are saying one (thing). Because if they cannot use force, the deduction is that there must be negotiation,” Bitrus said. “And if their commander-in-chief, the president, is saying that he will not negotiate, then they are not on the same page.”

Gov. Kashim Shettima of Borno state, the birthplace of the Boko Haram extremists and the northeastern state from which the girls were abducted, said recently: “We impress on the federal authorities to work with our friends that have offered to assist us to ensure the safe recovery of the innocent girls.”

Nigeria’s military and government have faced national and international outrage over their failure to rescue the girls seized by Boko Haram militants from a remote northeastern school six weeks ago.

Jonathan finally accepted international help. American planes have been searching for the girls and Britain, France, Israel and other countries have sent experts in surveillance and hostage negotiation.

A Boko Haram video has shown some of the kidnapped girls reciting Quranic verses in Arabic and two of them explaining why they had converted from Christianity to Islam in captivity. Unverified reports have indicated two may have died of snake bites, that some have been forced to marry their abductors and that some may have been taken across borders into Chad and Cameroon.

Amnesty International said the authorities failed to act even though they were warned hours before Boko Haram militants staged the abductions.

Similar accusations against Nigeria’s security forces are now coming out about the twin bomb attacks in the central city of Jos that left more than 130 people dead on May 20.

Traders in the Terminus market that was attacked say police failed to act after traders warned them about an abandoned vehicle hours before the bombings.

“Our members reported to the police that they noticed the presence of the (Peugeot) J5 bus parked early morning on that fateful date, and we don’t know the owner,” said Kabiru Muhammad Idris, a member of the traders welfare committee at the market. He said police only removed the plates of the bus, and didn’t check its contents.

His testimony was backed by other traders but denied by Plateau state police spokeswoman Felicia Anslem.

“No one informed the police about the J5 bus that was allegedly parked,” Anslem said.

No one claimed responsibility for the attack, though Boko Haram is suspected.