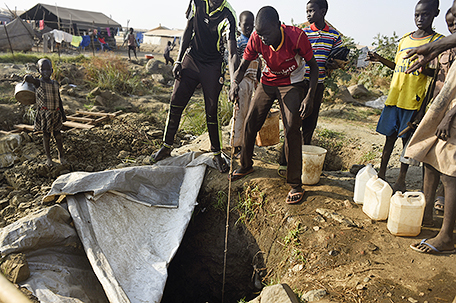 ABOVE PHOTO:  In this photo taken Jan. 2016, displaced people draw water from a hole dug in the ground, in the United Nations camp for displaced people in the capital Juba, South Sudan.  (AP Photo/Jason Patinkin)

ADJUMANI, Uganda — When the refugees arrive at this camp near the border with South Sudan, the beans provided by the United Nations are their only source of protein. There is no milk, not even for the toddlers with distended bellies who tightly hold onto their mothers’ skirts in the intense afternoon heat.

Now, less than two months since a new outbreak of violence in South Sudan sent a surge of about 70,000 refugees into this neighboring East African country, the U.N. and its partners are struggling to feed them. Last month, the U.N. announced that South Sudanese refugees who arrived in Uganda before this latest wave would see food rations or cash allowance cut in half.

As the U.N. refugee chief visited Monday, some of the refugees held up placards demanding better rations and a chance to move out of overcrowded camps and grow food for themselves.

The refugees are running “on empty stomachs,” they said in a memo they presented to U.N. High Commissioner for Refugees Filippo Grandi.

The humanitarian emergency could become a disaster if things go out of control, Grandi said. “The resources are still insufficient.”

Close to one million people have fled South Sudan since civil war began in December 2013, and a peace deal reached a year ago has been repeatedly violated. Tens of thousands have been killed.

Nyumanzi Transit Center, built to hold 2,000 refugees before they can be sent to a more permanent settlement, is now home to more than 7,000 newcomers, most of them women and children. They live in crowded structures of tarpaulin that bake like furnaces in the sun.

There are not enough toilets and water sources. Earlier this month, a cholera outbreak in some refugee centers infected 54 people; no deaths were reported. Young girls going out to collect firewood or fetch water have been sexually assaulted.

But it is the food that causes the greatest concern. The U.N. rations are beans and a corn porridge known locally as posho.

Martina Murra, a 56-year-old woman who was among those who erupted in tribal song and dance at the sight of Grandi, said her five children were starving.

“Sometimes we eat posho without sauce,” he said.

The U.N.’s World Food Program says it needs about $7 million a month to provide life-saving food assistance to refugees in Uganda.

Earlier this month, the U.N. and Uganda’s government said about 200,000 refugees who arrived before July 2015 would have their food rations or cash assistance reduced by 50 percent because of low funding and the surge in new arrivals.

A full ration means 2,122 calories of food per person per day during their first year, decreasing as they become increasingly self-reliant, according to WFP. Others get cash, which they can spend however they choose.

At the edges of Pagirinya camp, home about 20,000 more settled South Sudanese refugees, shops are being erected for businesses selling everything from groceries to timber. Shelters hammered out of iron sheets dot the verdant plains, makeshift homes for refugees who try to survive the unpredictable rations by planting crops like corn.

This is the life that Richard Lagu, 22, hopes for once he leaves the holding center he shares with family members after fleeing South Sudan following the latest fighting.

He said he was happy to be in Uganda, where fully settled refugees can access the same health facilities and schools as the locals.

Asked when he might return home, Lagu said simply: “I don’t know.”