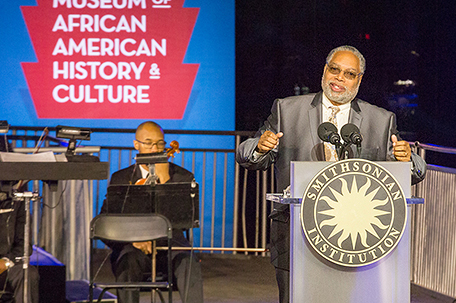 ABOVE PHOTO:  Lonnie Bunch, the founding director of the Smithsonian Institution’s National Museum of African American History and Culture welcomes guests to the museum’s special ceremony outside of the Smithsonian’s newest museum that is scheduled to open in Fall 2016.    (Cheriss May/HUNS)

WASHINGTON D.C. — Hundreds gathered at an inaugural event for the Smithsonian’s National Museum of African American History and Culture Monday to celebrate the completion of the museum’s exterior in a year that marks three significant moments in American history.

“Tonight we commemorate the meaning of freedom, a term that was never abstract to African Americans,” Bunch said.

African Americans’ triumphs through centuries of harsh discrimination were honored and remembered during the celebration, including the premiere of a seven-minute projection depicting over 150 years of African American progress, from Harriet Tubman to the Black Lives Matter movement.

The projection ran on Tuesday and Wednesday evenings from 5:30 PM to 9 PM.

“This building is homage to the fact that so much of our history is hidden in plain sight,” Bunch said.

When the building opens officially in the fall of 2016, it will include a wide array of Black memorabilia and history, including Harriet Tubman’s hymnal, a lace shawl given to her by Queen Victoria and family photographs of her funeral, a Jim Crow railroad car, Chuck Berry’s red Cadillac convertible, remnants from a slave ship found off the coast of South Africa, works of celebrated Black artists and a Tuskegee Airmen training plan, a slave cabin, Emmett Till’s casket and Muhammad Ali’s protective boxing gear.

Washington Mayor Muriel Bowser linked the history of Black Washingtonians to the history of African Americans, citing cultural contributors like composer, pianist and band leader Duke Ellington, singer and composer Marvin Gaye and actress and singer Pearl Bailey, all of whom were born and raised in the nation’s capital.

After a reading of Margaret Walker’s “For My People,” scored by Darin Atwater and performed by the Soulful Symphony, gospel singer BeBe Winans sang “America” and “Stand” alongside the symphony and a gospel choir.

Winans said seeing the exterior of the museum was a special moment for him.

“As I stood in front, I felt like I was standing in the middle of my past and my future,” he said.

“The message is very clear,” he said. “This is not just a museum for African Americans, but for the world, and we are part of the world.”