In Haiti, cradle of rich visual heritage is being reinvented 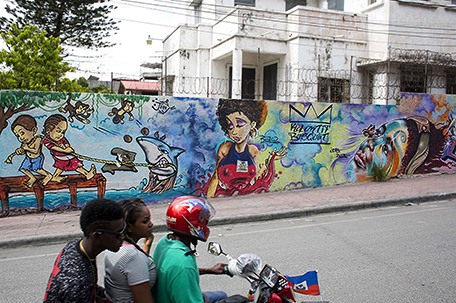 ABOVE PHOTO: A motorcycle taxi rides past a wall blanketed with murals in Petion-Ville, a suburb of Port-au-Prince, Haiti. There’s no shortage of untapped talent in Port-au-Prince; its packed metropolitan area fizzes with creative energy. Portraits are routinely painted in barber shops and fantastical designs decorate the sides of minibuses called “tap-taps.”  (AP Photo/Dieu Nalio Chery)

PORT-AU-PRINCE, Haiti — Youvensky Despeignes used to spend hours a day at home drawing pencil-and-ink abstractions on cheap notebook paper, his aspirations as a painter frustrated by a lack of opportunities in Haiti where a rich artistic heritage has suffered decades of decline.

But the 22-year-old is now a scholarship student at the Centre d’Art in Port-au-Prince, learning to paint from one of Haiti’s most renowned visual artists. He is the beneficiary of efforts to resurrect the storied cultural center following the destruction of its gingerbread building of ornate latticework in a 2010 earthquake and the death of its longtime director a few months later at age 92.

While some thought the twin blows marked the end of the longtime cradle of Haitian artists, a young, energetic team is reviving the center and with it a remarkable heritage of vividly colored paintings, sculptures and other works that earned Haiti an international reputation for raw, imaginative art.

“I feel like there’s a path opening for me to become a true artist,” Despeignes said in a gazebo-like workshop behind the center’s concrete walls. “This place is inspiring.” 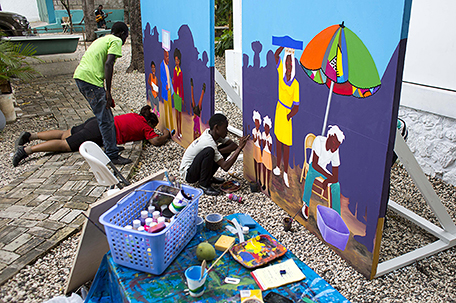 In this May 25, 2016 photo, Haitian visual artist Tessa Mars stretches out on a concrete path to correct a detail on the bottom of a student’s oil painting, at the resurrected Centre d’Art or Art Center in Port-au-Prince, Haiti. Mars is helping the students who hope to enter their work in a best depictions of daily life in a democracy compeition. (AP Photo/Dieu Nalio Chery)

While the reinvented Centre d’Art faces many challenges, its new classes and workshops are attracting dozens of students with a rotating cast of Haitian and foreign teachers. Small buildings for classes have been constructed. Ambitious work is underway to catalog archives and document its historically important collection of roughly 5,000 artworks.

“It feels like the right energies are gathering here,” said Tessa Mars, a 30-year-old Haitian painter who is one of the instructors.

The work of resurrecting the center is being led by executive director Louise Perrichon, a Frenchwoman who fell in love with Haiti when she arrived in 2007, and Pascale Monnin, a Swiss-Haitian painter and sculptor who is the artistic leader. The Haitian nonprofit Knowledge & Freedom Foundation and a French family foundation are the main providers of institutional support.

Monnin, whose family owns a prominent Haitian art gallery, said a resurgence of the center is part of an effort to reclaim the country’s artistic legacy, which contrasts dramatically with its economic impoverishment and recurrent political disorder.

There is no shortage of untapped talent. Port-au-Prince’s packed metropolitan area fizzes with creative energy. Portraits are routinely painted on the walls of barber shops and fantastical designs decorate the sides of minibuses called “tap-taps.” Others work in the artisan industry, producing whimsical items for visitors like metal wall hangings and colorful carvings of animals.

Perrichon and Monnin want the reinvented Centre d’Art to nurture original creations, not tourist knockoffs or copies of copies.

Encouraging serious Haitian artists has been the core of the center’s mission since its founding in 1944 by Dewitt Peters, an American watercolorist who came to Haiti to teach English. He sought out self-taught painters like Hector Hyppolite, known for incorporating the iconography of the Haitian religion Vodou, known also as Voodoo, into his work.

While there were always artists from Haiti’s elite and middle classes at the Centre d’Art, it was Hyppolite and other untrained artists from humble backgrounds whose work was championed by intellectuals and critics in Europe and the United States.

Paintings made at the Centre d’Art by artists lumped in with a movement coined “naive” or “primitive” swiftly became a sensation. Wealthy collectors around the world sought out pieces. For decades, the popularity of Haitian art was aided by the once-flourishing tourist industry, including cruise ships that docked three times a week in Port-au-Prince’s harbor.

But once Haiti began sliding into political dysfunction following the 1986 overthrow of the 28-year Duvalier dictatorship, the local market for paintings and sculpture diminished. An early 1990s trade embargo put in place after a bloody coup toppled an elected government created a particularly trying time.

Unlike in wealthier nations where national treasures are protected by the state, private organizations and individuals do nearly all the work of safeguarding them in Haiti. In the coming years, Perrichon hopes to attract more funding partners to create a documentation center and various other upgrades to the Centre d’Art.

But she says the core mission will always stay the same: Find, mentor and promote Haitian artists while safeguarding visual art gems.

To ensure a good mix of backgrounds, a third of all classroom spots are reserved for scholarship students who can’t afford the roughly $100 fee for a four-month class. The center provides the brushes, canvas and other materials students need.

For Despeignes, receiving a scholarship was a welcome recognition of his talent.

“I need to create,” he said on a recent afternoon, taking a break from painting a depiction of the Garden of Eden under the instruction of Frantz Zephirin, a Haitian painter whose lush work has appeared on the cover of The New Yorker and Smithsonian magazines.

Gerald Alexis, a Haitian art historian and curator, said he hopes the center’s leadership team will continue providing an injection of vigor into an institution that was running the risk of fading before the quake.

“I strongly believe that with the energy and the determination of the people involved, the Centre, instilled with modern ideas, can once more become an institution able to play its role in fostering Haitian art and artists,” he said.