Guest Commentary: Let’s hear it for the ladies! 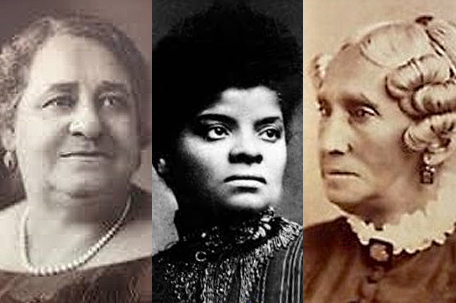 “Do you ask what we can do?  Unite and build a store of your own.  Do you ask where is the money?  We have spent more than enough for nonsense.”

“Let the Afro-American depend on no party, but on himself, for his salvation.  Let him continue toward education, and above all, put money in his purse.”

Over the years, many Black women have stood, spoken out, and fought against mistreatment; they have also advocated for Black people to use our economic resources to empower ourselves and propel us on to self-sufficiency.  Last week, I selected three strong Black men; this week, it’s three strong Black women.

Maria Stewart was an educator, abolitionist, and author, but she was also an advocate for Black self-sufficiency. A contemporary and personal friend of David Walker, (Author of ‘David Walker’s Appeal’), Maria spoke passionately to our people in attempts to guide us from dependency to independency.  “Her dedication to fighting Black oppression through teaching, writing, and speaking was relentless.”  It took strength to shoulder and promote the issues Maria fielded in the mid-1860’s.  She is one of many in the pantheon of Black women who were not timid when it came to espousing her beliefs in support of Black people.

Maggie Lena Walker was the first female to charter and successfully preside over a bank, the St. Luke Penny Savings Bank, in Richmond, Virginia.  Walker founded the ‘St. Luke Herald’ newsletter, and she opened a department store for Black women in 1905.  She ran for Superintendent of Public Instruction on the Republican ballot, but was defeated, and was instrumental in keeping her bank open through the Great Depression by merging it with two other banks in 1929.  Cooperative economics?  Strategic alliance?  Working collectively for the good of the whole?  Sound familiar?  Walker’s spirited and determined leadership takes a backseat to no one and should be held up as an example of what we must do, even today, to help ourselves.

Ida B. Wells, after enduring a horrendous childhood, losing both her parents – within 24 hours – and her youngest brother to yellow fever, went on to be one of the most feared journalists and bravest women in the history of this country.  This gun-toting original “Sister Souljah” wielded a pen with the aplomb of any expert in the field of journalism.  Long before Sister Rosa Parks did her thing, in 1884 this diminutive but strong Black woman refused to move from her seat in the “ladies” section of a train to one that was reserved for Negroes.  Wells, who was referred to in the Memphis newspaper as the “Darkey Damsel,” sued the train company and won, only to have her victory overturned by the state supreme court.

These are the kinds of examples we must share with our young people and hold in high esteem, especially when it comes to being conscientiously consciousness about what it means to be Black in America.  Too often, as Carter G. Woodson warned, we choose “mis-leaders” instead of authentic leaders.  We must do better because we have men and women of old that showed us the way.

Our women worked as housekeepers, journalists, teachers, bankers, and other occupations, but they understood, advocated, and practiced basic economic empowerment principles.  They knew that unless Black folks established a solid economic foundation, we would never have the power we need to become self-reliant.

What’s it going to take to get us organized and moving in the right direction? Will we continue to languish in meaningless rhetorical gymnastics espoused by talking heads, politicians, organizational leaders, and amongst ourselves?  Or, will we cast off the mundane, the nonsensical, and the time consuming back-and-forth that continue to keep us at status quo?

Maria, Maggie Lena, and Ida B. did not settle, sell out, or give in to the social pressures they faced in the 19th century.  This is the 21st century; we have tremendously more resources than they did, yet we are still allowing ourselves to go through much the same as they did.  They already paid the bill for what we should be enjoying today.  All we have to do is take our appropriate place in this society, despite any and all resistance, carve out a niche and control it, and not get caught in the snares of jealousy and selfishness.

After 45 years of watching the selfishness of his brothers and sisters, W.E.B. DuBois said, “I assumed that with knowledge, sacrifice would automatically follow.  There were especially sharp young persons [at Fisk University] with the distinct and single-minded idea of seeing what they could get…for themselves, and nobody else.”