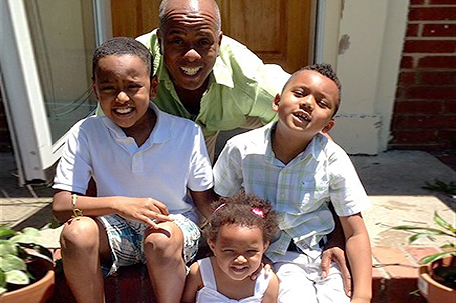 ABOVE PHOTO:  Stafford Armstead is among the millions of Black fathers who defy the stereotypes about Black fatherhood. He diligently cares for his three children alongside his wife, Nichole.  (Courtesy Photo)

The National Center for Health Statistics says that 70 percent of African-American fathers who live with their children are more involved in their daily lives compared 60 percent of White fathers.

“Black fathers (70 percent) were most likely to have bathed, dressed, diapered, or helped their children use the toilet every day compared with white (60 percent) and Hispanic fathers (45 percent),” says the 3-year-old study by NCHS.

This week, as millions reflect on the importance of fatherhood, members of families around the U. S. give their thoughts on what Black fathers bring to the table.

“Fatherhood for a young man, especially a young Black man, is incredibly important simply because it gives us a sense of strength in a world in which everybody seems to be against you. It breaks crippling stereotypes and strengthens the African- American family,” says Darius Bego, a 23-year-old father who is a student at the University of South Carolina.

He continues, “Most of all, having a father provides a great example of what it’s like to be strong man in a world that grows increasingly dangerous and challenging for a Black man. And when fathers instill such strength and wisdom into each of their children it strengthens the community as a whole for each generation.”

Bryan Jeffries, 20, of Dayton, Ohio says the Black father stands as an example to his children.

“For a daughter, it is her model for how a man should treat her. And for a son, it is a model for what he should be as a father. I think what a Black father brings to the table is a mentor on how to maneuver as a Black man in America as well as a confidant for information that may be too hard for a mother to hear,” Jeffries says.

Jennifer Allen, 40, of Los Angeles, agrees that a father has a special influence on a young woman.

“Young females without fathers can tend to be promiscuous and lost about love. This causes them to look and search for the lost love that’s been missing from the Black father,” she says. “They end up with somebody who doesn’t love them. A father that is home is special and should be. My father wasn’t home, but for some reason I could talk to him and tell him stuff that I couldn’t tell my mom. When a Black father is home he is truly the definition of a backbone and a protector.”

The relationship between a father and daughter are crucial, but the father and son is equally important, says Kimberlyn Battle, 43, also of Los Angeles.

“A child is the reflection of affection. No one has ever died from ‘over love’,” Battle says. “There are many situations that love may endure. I personally had three father figures, including my biological father. The more fatherhood is celebrated, the better the seeds.”

In a world that largely stereotypes and denigrates people of color, the Black father often serves as the first example of leadership.

“Fatherhood provides a sense of strength and leadership to the kids. For a son he sees his father as an example for how a man should become – learning valuable life lessons on how to find your way in life and become the head of your family,” says Baltimore native Lantz Carter, 28, a Lacrosse professional.

The relationship is one thing. But children need both love and support, stresses Indigo Evans, a 21-year-old student at the University of North Carolina at Charlotte.

Candace Mitchell, a 21-year-old Stillman College student from Birmingham, sees the Black father is the teacher of his children.  “The importance of fatherhood is being an example for your kids, teaching them how to be independent.”

Though some people characterize Black fathers as negative stereotypes, they are more involved in their children’s lives than many people know.

Carter, the Lacrosse professional, knows well how young people idolize stars. But, he says, it’s the father-figure right there in their home who often serves as the hero.

“Black fathers can be the role models for their sons, instead of athletes and celebrities, navigating young Black men in the right path to be successful,” Carter concludes. “Black fathers can build strong relationships with their daughters and teach them how to have good judgment when picking men to get involved with. Lastly, Black fathers can change the stereotype of Black men not keeping the family together and leaving the women and kids behind.”