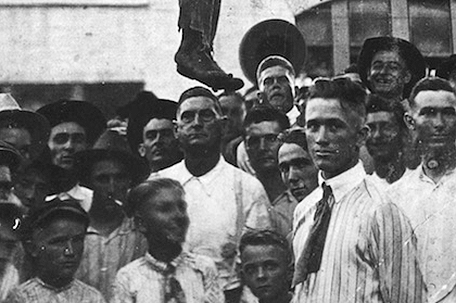 The Equal Justice Initiative, a Montgomery, Alabama-based nonprofit organization that challenges poverty and racial injustice, has launched in partnership with Google “Lynching in America: Confronting the Legacy of Terrorism,” an interactive search engine designed to spark a national conversation about the more than 4,000 lynchings of African-American men, women and children throughout the United States.

“Lynching in America is meant to foster an honest discussion about our history of racial injustice so that we can better understand the implications of our past for addressing the challenges of the present,” organization officials said.

Recent discoveries of hangman’s nooses at or near the National Museum of African American History and Culture in Washington, D.C., has shown that lynching Blacks is still very much in the minds of many Whites.

The website, “Lynching in America” features EJI’s full report in both digital and downloadable formats, with more data, information, and analysis than was previously available online. The site brings together EJI’s extensive research and resulting data with the stories of lynching victims, as told by their descendants.

Through audio stories and short documentaries, visitors will experience a detailed examination of the tragic legacy of racial terror lynching in America, and its continuing impact on African Americans and issues today.

Visitors can also explore interactive maps that include the locations of racial terror lynchings and in-depth profiles of people whose lives were forever altered by these acts of violence. Data visualizations track the Great Migration, a time when millions of African-Americans fled the terror of the South to find refuge in the North and West, shaping the demographic geography of our country today.

The Equal Justice Initiative is also sharing a high school lesson plan, which will equip educators with tools to teach students about the era of racial terror lynchings and bring this largely unacknowledged history into the classroom.

The collaboration with Google builds on EJI’s in-depth study in 2015, a study that revealed between 1877 and 1950 3,959 Blacks were lynched in 12 Southern States, 800 more than previously reported.

In 2017, EJI supplemented this research by documenting racial terror lynchings in other states, and found these acts of violence were most common in eight states: Illinois, Indiana, Kansas, Maryland, Missouri, Ohio, Oklahoma, and West Virginia.

Next year, EJI will open the Memorial to Peace and Justice, a national monument commemorating more than 4,000 African-American victims of lynching.

In addition, EJI will open the 11,000 square-foot museum titled “From Enslavement to Mass Incarceration.” The museum will explore America’s legacy of slavery, racial terror, segregation and mass incarceration.