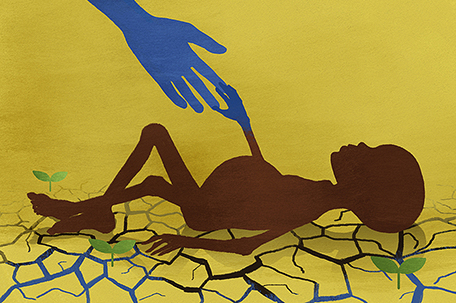 LAGOS, Nigeria — Those horrendous images of stick-like victims of famine may disappear from your screen.

Calamitous famines appear to have vanished from the planet, but more must be done to eradicate all such scourges, including redrafting U.S. terror legislation that inhibits life-saving humanitarian work, says a new report published Monday.

The study, part of the 2015 Global Hunger Index, says it’s one of the “unheralded achievements” of the past 50 years: the elimination of calamitous famines that cause more than 1 million deaths, and reduction “almost to a vanishing point” of great famines, which cause more than 100,000 deaths.

In a telephone interview with The Associated Press, de Waal attributed the progress to the end of colonialism, total war and leaders responsible for “gargantuan amounts of deaths” like Russia’s Stalin and China’s Mao.

“The message from my study is that in order to eradicate famine, the last bit (of work) is to do with conflict resolution and lifting those restrictions on humanitarian action,” de Waal said.

He singled out U.S. laws criminalizing support for terrorist organizations that he said inhibit humanitarian aid because it is “very broad legislation that, even if you do it inadvertently, you still are afoul of that law.”

He said they caused life-costing delays as humanitarian agencies hesitated to help in Somalia in 2011.

“I think that’s wrong, it has cost a lot of lives and it is not helpful to the cause of countering extremism if the U.S. is saying don’t help while children are starving to death,” de Waal said.

The last calamitous famine was in Ethiopia in 1983-1985 and though Africa sometimes is stigmatized as the poster child of such scourges, de Waal said the continent historically has suffered the fewest great famines, and only two calamitous famines in the past century, the other being the famine induced by the failed Biafran war to secede from Nigeria in 1967-1970.

Cambodia suffered the third calamitous famine of the 20th century, when 1.8 million died under Pol Pot in 1975-1979.