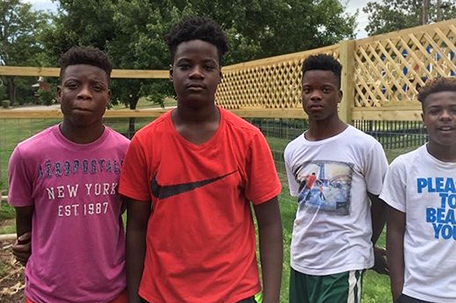 ABOVE PHOTO:  The Four teens from the LaGrange GA Housing Authority seeking jobs in their neighborhood to keep out of trouble and away from gangs.

Many Black youth get caught up in criminal activities during the summer when school is out and there is an abundance of idle time. But four Georgia teenagers sought help to avoid going down that path, and someone answered their call.

Dylik, Dennis, Deion and Jalen approached LaGrange, GA Housing Authority Zsa Zsa Heard in her office on July 27. The boys, who are between the ages of 13 and 14 and live on the housing authority property, asked Heard if she could provide them with a job. She was surprised by why the teens said they wanted to work.

She asked if gang members had approached the boys before, and they replied, “all the time.”

The boys had asked Heard last year if she could help them earn money, and she connected them with a maintenance worker who taught them basic carpentry skills. But this time, she finally understood why they were so adamant about staying occupied.

This summer, Heard has given the boys work in the community tending to vegetable gardens, maintaining the community chicken coup, delivering mail, and other tasks that allow them to earn a few dollars.

Heard posted a message on Facebook about the boys asking for her help, and she added, “The streets will not have our children!” The response she received was very positive.

“Several of their teachers inboxed me and told me what good kids they were,” Heard said. “They said if you give them the support they need, they are going to be successful.” The summer jobs seem to be paying off for the teens. One of them has said that after working in the garden, he now has an interest in studying a career working with livestock. “If they feel that they’re valuable, and if we show them how important they are, then we don’t risk losing them,” she said. “I don’t want them to seek the love and attention from the negative. I want them to find their value in other things.” Although the children return to school August 10, Heard will continue to provide the boys with odd jobs any time they have a break from school. The boys will also be entering a teen leadership and mentoring program that will be operating throughout the school year.