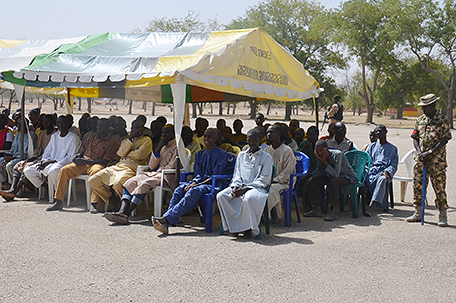 ABOVE PHOTO:  Men who were detained by Nigeria army who have no links to Boko Haram sit under a canopy before their release at the Giwa military barracks in Maiduguri, Nigeria. Babies and children are among scores of people dying in military detention at the notorious Nigerian Giwa military barracks where soldiers illegally hold suspected Islamic extremists, Amnesty International charged Wednesday, May 11, 2016.  (AP Photo/Jossy Ola, File)

Boko Haram had set up camp in the forest after fleeing another military operation in neighboring Nigeria and had been training captive young girls and women as suicide bombers, he said.

The news came as French President Francois Hollande joined several West African leaders at a summit in Abuja, the Nigerian capital, where they discussed progress in the fight against Boko Haram and how to resolve the humanitarian crisis it has created. The extremist group has forced more than 2 million people to flee their homes, some across borders.

“We have to make sure they can get back to their homes,’’ Hollande said after meeting with Nigerian President Muhammadu Buhari before the summit, noting the need for “the right development policies.’’ Marginalization and corruption has allowed the Islamic extremists to flourish in northeast Nigeria.

Both leaders stressed the success of a multinational force of Nigeria and its neighbors, helped by training, intelligence and information-sharing by France, Britain and the United States,  that has recaptured territory where Boko Haram had declared an Islamic caliphate. British Foreign Secretary Philip Hammond was at the summit along with U.S. Deputy Secretary of State Antony Blinken.

But many refugees say they will not return home until it is safe and there are doubts Nigeria’s military can secure the vast rural areas where Boko Haram now roams. The extremists have turned to using suicide bombers, often women and girls, to hit soft targets like mosques and marketplaces.

The nearly 7-year insurgency, which has spread beyond Nigeria’s borders, has killed at least 20,000 people, according to Amnesty International.