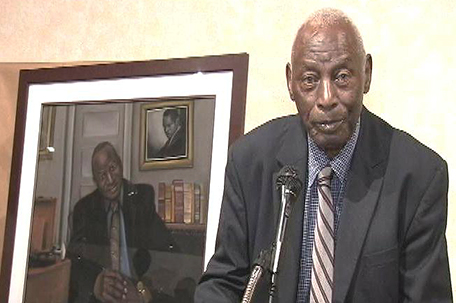 ABOVE PHOTO:  Historian Charles Blockson gives remarks after being presented with his portrait at the Philadelphia Legacies Awards Dinner.  (Paul Gibson Photo)

People that have made important contributions to Philadelphia were honored at the first annual Philadelphia Legacies Awards recently held at the Independent Seaport Museum on Penn’s Landing.  The awards are the highlight of “Philadelphia Legacy Week,” September 25 through October 1, that was established by a City Council resolution.   Organized by Moonstone Arts Center and the Bridging Worlds Mentor Program, the celebration has been established as an annual observance to strengthen awareness of the city’s diverse cultural heritage and its importance as a destination for visitors from around the world.

Former Mayor W. Wilson Goode, Sr.  gave the invocation and the opening address on the importance of recognizing the legacies and outstanding contributions of Philadelphians. Those attending were entertained by the jazzy sounds of Shirely Lite and the Calabash Jazz Band that included a steel drum.

The highlight of the evening was the presentation of portraits to four special honorees or their families. The portraits created by Philadelphia artists Brittney Knox, La Reine Nixon and Bill Whiting.  Those who were honored with portraits are: Historian/bibliophile Charles L. Blockson, founder of the Blockson Afro-American Collection at Temple University. The collection includes over 500,000 books, newspapers, pamphlets and other media on the African presence throughout the Diaspora. Blockson is the author of several books and is considered a leading expert on African American history in Philadelphia and Pennsylvania. 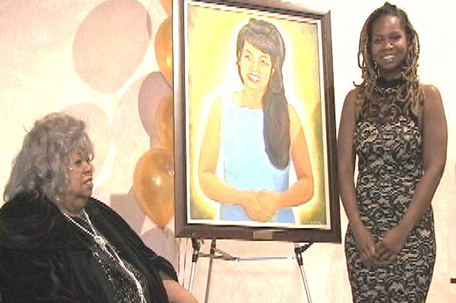 Queen Mother Falaka Fattah and artist Brittney Knox with portrait of Fattah as a young woman in her 30s, presented at the Philadelphia Legacies Awards Dinner. (Paul Gibson Photo)

Queen Mother Falaka Fattah, and husband David, founded the House of Umoja in 1968 with their own funds to help stem the tide of rampant gang violence that pervaded Philadelphia at the time. Before working with youth, Fattah was a journalist for the Philadelphia Tribune and publicist for entertainers including Sam Cooke and Otis Redding. She later published Umoja Magazine. Her focus changed when she discovered that one of her sons was a member of the Clymer Street gang. She invited the gang members to her home for discussions and some remained. She and her husband provided them with family structure, supervision, guidance and loving care. Members of other gangs heard about her, attended the sessions and also stayed. That was the beginning of the House of Umoja. The north Frazier Street urban “Boy’s Town” was instrumental in eradicating gang violence in the city. In 1974, at the height of gang violence in Philadelphia, the House of Umoja held a Gang Peace Summit that led 30 gangs to sign a truce.  Praised by U.S. Presidents Carter, Reagan and Clinton for her work with at-risk youth, Fattah and the House of Umoja has guided more than 3,000 boys into manhood. 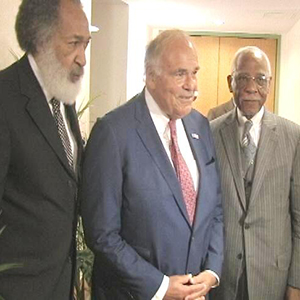 Sherwin Seligshon, founder of Interdigital Communications has been a pioneer in wireless telecommunications technology for more than 30 years. He developed the portable digital telephone, patented his cellular hardware and software technology, and licensed those patents to other companies making handsets.

The late Jerry Wolman, bought the National Football League Philadelphia Eagles franchise in 1963 to become the youngest owner in the league. He also owned Connie Mack Baseball Stadium on Lehigh Avenue in North Philadelphia, and was one of the founding owners of the National Hockey League Philadelphia Flyers. A philanthropic individual who never forgot his roots, Wolman died at the age of 86 in 2013. Former Governor Edward Rendell joined the Wolman Family at the awards dinner in memory of his friend.

Others receiving the Legacy Award include:

The late Walter Livingston, architect and civic leader who broke through many color barriers during his professional life. A practicing architect for more than 55 years, Livingston was involved in the designs of such notable Philadelphia sites as Progress Plaza, Zion Baptist Church, Triumph Baptist Church, Edison High School, the Clef Club of Jazz & Performing Arts and the Criminal Justice Center.  He served on the board of the Philadelphia Redevelopment Authority from 1958 to 1972 and was involved in the completion of Independence Mall and the construction of housing in West Philadelphia.  Livingston was president of the Urban League, and a founder and charter member of the University Swim Club, the first private, integrated swim club in the city. A Democratic committeeman in the 46th Ward for over 30 years, he died in 2011 at the age of 89.

The late J. Whyatt Mondesire was president of the Philadelphia NAACP and founder of the Philadelphia Sunday Sun newspaper.  During his tenure the membership of the NAACP increased to over 5,000. The outspoken activist died in 2015 at age 65. Mondesire’s son Joseph accepted the award on behalf of his father. 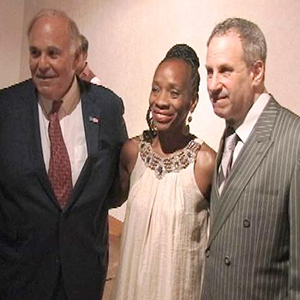 La Reine Nixon, artist and owner of the 49th Street Art Gallery was surprised to be among the honorees. Nixon gained national recognition for her portrait of the late R& B singer Gerald Levert, which was center stage at his memorial service. The talented artist created the program book and portraits of Blockson and Seligsohn that were presented.

“The Philadelphia Legacy Week project is dedicated to creating a deeper understanding of Philadelphia’s unique place in the history of the United States – past and present,” explained Stephen Satell, founder of Bridging Worlds Mentor Program and founder/executive director of Philadelphia Legacy Week. “The purpose is to bring pride to the city by highlighting people and institutions that have made important contributions.  The Legacies Award dinner was a great time to reflect on and honor those contributions.”