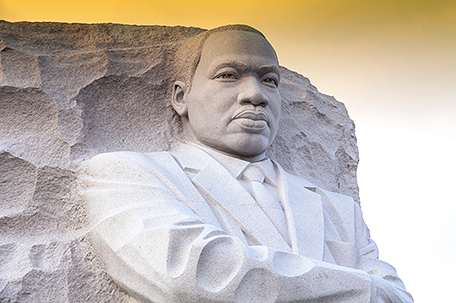 PATERSON, N.J–Thousands of people were jamming the sidewalks on a late March evening 50 years ago when the motorcade that brought Dr. Martin Luther King Jr. to Paterson finally turned the corner onto Auburn Street and made its way to the old wooden church where the sound of gospel music swirled through the rafters like incense.

King, as usual, was running late, his stop at Community Baptist Church of Love was coming at the tail-end of what had been a one-day swing through Newark, Orange, Jersey City and, finally, Paterson. The focus of the visit on March 27, 1968, was raising money and awareness of the Poor People’s Campaign, King’s latest venture in the non-violent struggle for civil rights that sought to bring thousands of demonstrators to Washington that spring to erect a shantytown to protest poverty.

“His message was about the cities, and how Paterson didn’t stand alone,’’ recalled Marilee Jackson, a community organizer who was inside the church and would later be elected to the city council. “It wasn’t just about integration, or desegregation. It was about economic opportunity and economic parity.’’

No one who came to see King that day could have known that it would be his last public appearance in the North. But in what now seems like an eerie foreshadowing of his death by an assassin’s bullet eight days later, King stood at the pulpit beneath a painting of Jesus praying in the Garden of Gethsemane on the night before his crucifixion, begging “for this cup to pass,’’ according to scripture.

King spoke at the church for about 20 minutes, then left Paterson and flew home to Atlanta later that night. The next morning, he flew to Memphis, Tennessee, to lead an ill-fated march of striking sanitation workers that ended in a riot.

Desperate to prove that non-violent protests could still force change, King stayed on in Memphis to plan another demonstration. But a single bullet fired by James Earl Ray cut King down as he stood alone on the balcony of the Lorraine Motel on the evening of April 4, 1968.

Had King not been assassinated, the visit to Paterson would have amounted to little more than a footnote in history. But the tragedy that unfolded in Memphis , seemingly foretold by King when he addressed a church crowd the night before his death, saying “I’ve seen the Promised Land , I may not get there with you, but I want you to know tonight that we as a people will reach the Promised Land’’ , makes the Paterson visit all the more poignant.

The church still stands, and although it was designated a municipal landmark back in 2011, it’s never been properly marked. There’s no plaque to recall King’s visit at what is now the Bethel A.M.E. Church, and a vacant lot across the street that was supposed to be set aside as a park to honor the slain civil rights leader remains a patch of dirt.

“It now seems prophetic that Dr. King stood under that painting,’’ said Jimmy Richardson, 65, who grew up in a house about 50 feet from the church and remembers standing on his porch waiting for King to arrive that day. “Looking back, that day was kind of a conclusion. But it is also a reminder of what Dr. King stood for. His legacy is something we can celebrate and be proud of.’’

Richardson moved out of Paterson long ago and now lives in Hillside in Union County, where he is a retired executive chef. But he never really left the city behind. Since the 1980s, he’s been assembling bits and pieces of Paterson history, with an special interest in telling the story of African-Americans.

His digging helped convince the City Council to rename Auburn Street and to call it “Freedom Boulevard,’’ to honor King, and the abolitionists who lived in the area prior to the Civil War and made Paterson a stop on the Underground Railroad. Last year, he secured a $35,000 grant from the National Park Service, so Paterson can apply to put Bethel A.M.E. Church and four other sites on the National Register of Historic Places.

“Dr. King’s visit is something that Paterson should celebrate,’’ Richardson said.

Although it was in the North, the Paterson that King visited in 1968 was not all that unlike cities in the South. African-Americans represented more than one-quarter of the city’s population that year, and they were concentrated in the Fourth Ward around Auburn Street. But Whites controlled the government and the schools.

“We used to call Paterson ‘Up South,’ said Benjamin Leak, one of two Belack Paterson police officers who were King’s bodyguards at the church that day. “Paterson was a segregated town.’’

Another member of King’s entourage was Russell Graddy, the owner of a barbeque restaurant in the Fourth Ward who was part of the security detail. Graddy said Paterson still had a long way to go in 1968.

“At that time, it was difficult for an African-American to buy a home on the city’s Eastside,’’ he said. “There were problems in the schools. We wanted more African-American principals and teachers. We were looking for changes across the board, in the police department, in the school system, in housing.’’

Charley Mae Garrison was in the choir that day and remembers the song she sang, “Holding On (And I Won’t Let Go My Faith).’’

“He was very kind, and he was talking about the things we need to do in our neighborhood, and what young people need to do to walk a straight line and stay out of trouble,’’ she said.

Newspaper accounts said the church was packed and more than 2,000 people stood outside for hours waiting for King to arrive. The message he delivered was as much about striving for economic justice as racial equality.

“We want to bring pressure on Congress to recognize the needs and to demonstrate to our government it must face and solve the problems of poor people,’’ King said. “It is a shame that this nation, the wealthiest in the history of the world, has 40 million poor people. We are going to Washington, seat of this government, to dramatize the horrors and evils of poverty.’’

But King never got there. Eight days later he was dead. And in the grief-stricken days that followed, the pastor of the Community Baptist Church of Love, the Rev. Fred LaGarde, found a local artist to paint Jesus’ face Black.

“He was shot dead because he was for all the right things,’’ Garrison said. Richardson said King was unifying religious figure, unlike any other that the West has produced.

Riots broke out in 168 cities in America after King was killed. But Paterson remained calm. The mayor at the time, Lawrence “Pat’’ Kramer, credited Black leaders for keeping the peace.

“King was a man who preached non-violence, and I think a lot of the ministers were saying at the time, `now is not the time to start breaking windows. There’s a better way.’’’

Fifty years later, the painting of Jesus praying in the Garden of Gethsemane still hangs over the pulpit.

The Community Baptist Church of Love congregation is gone and it was replaced by the Bethel A.M.E. Church congregation. When the Rev. Allan Boyer took charge of Bethel 13 years ago, he thought about changing some of the altar furniture. But congregants were adamant that the high-backed chair that King sat in that day remain, he said.

Boyer’s church doubles as the local anti-poverty agency, offering day care, health clinics and food to go along with the Sunday morning services. A sign draped across a chain link fence in the parking lot implores youths to “drop your guns and pick up your cross.’’

“It’s a transient neighborhood,’’ Boyer said. “People move in and out.’’

Attempts to honor King have had mixed results. In 2014, Boyer used a $100,000 grant from Passaic County to buy a piece of vacant land for a park. Richardson supplied a monument with an inscription about King, and the park opened. But a house next door to the park recently caught fire, and firefighters destroyed the fence battling the blaze, Boyer said.

And Boyer says he’s still waiting for the city to fulfill its promise to build a park on the vacant lot across the street. Former Mayor Jeffery Jones made that promise in 2011, but Boyer said his successor, Jose “Joey’’ Torres didn’t like the idea, and it never got built.

This month, the city tried to auction one of the two lots set aside for the park. Boyer got wind of the auction at the last minute and called Councilwoman Ruby Cotton, who represents the neighborhood. She had city officials pull the lot off the list.

“It’s like the right hand doesn’t know what the left hand is doing,’’ Boyer said. “I’d like to see a park for kids, with some cherry blossom trees, and some quotations from King, so they could learn about him.’’

Cotton says she’s committed to having the park built.

The park would pay tribute to a man who changed the world. Fifty years later, it would also serve as a reminder that change has to happen locally, if it is to happen at all.

Graddy, who is now 87-years old, drove in the security detail that brought King to Paterson that day. He was working at his restaurant in Paterson’s 4th Ward on the night King was assassinated. He still runs a restaurant there today, Mr. G’s.

“In 50 years, we’ve come a long way,’’ Graddy said. “But I do think we have a long way to go. That Promised Land that Dr. King spoke about, we still haven’t reached it.’’