Facing a ‘trial of strength in the streets’, crisis grows for Congo’s Kabila 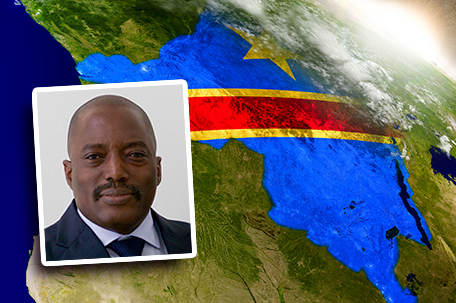 Congolese President Joseph Kabila is facing a ‘trial of strength in the streets’ if he stays in office beyond the constitutionally-mandated deadline of this week, say critics of the two-term leader who appears to be digging in for the long term.

Popular opposition leader Moise Katumbi has called on Kabila to step down before he becomes an “illegitimate” ruler.

Meanwhile, demonstrators in the districts of Kalamu, Matete and Lingwala and at Kinshasa University blew whistles to signal to Kabila that it was time to leave.

Presidential advisor Barnabe Kikaya downplayed the signs of discontent. “The constitution clearly states that the president remains in his position until his successor is elected by the people of the Congo, not by a loud and insistent mob,” he said dismissively.

Congo has never had a peaceful transfer of power since independence from Belgium in 1960. Observers fear the current political crisis could trigger a repeat of civil wars that killed millions of people between 1996 and 2003.

After 15 years, Kabila has become the symbol of stagnation and societal ills. The most prominent grievances are unemployment, corruption and lack of access to education, electricity, roads and transport. Rising inflation further worsens precarious living conditions.

But perhaps most shocking is a recent expose of Kabila’s personal “business networks” including some 70 companies controlled by the president, his wife, two children and eight of his siblings.

In the expose by Bloomberg News investigators, with support from the Pulitzer Center on Crisis Reporting, it was revealed that Kabila companies control diamond permits that stretch more than 450 miles across the country’s southern border with Angola. The Kabilas own more than 120 permits to dig gold, diamonds, copper, cobalt and other minerals.

Family members also have stakes in banks, farms, fuel distributors, airline operators, a road builder, hotels, a pharmaceutical supplier, travel agencies, boutiques and nightclubs. Another venture even tried to launch a rat into space on a rocket.

The exact value of the businesses isn’t known but publicly accessible documents reveal investments worth more than $30 million in just two companies, the investigative reporters found. Estimated revenue for another company exceeds $350 million over four years — while nearly two-thirds of the 77 million people live on less than $1.90 per day.

All in all, the Kabilas network of businesses has brought hundreds of millions of dollars to the family – which may explain why the president is ignoring pleas by the U.S., the European Union and a majority of the Congolese people to hand over power and avoid the kind of chaos that cost millions of lives after his father took power nearly two decades ago.