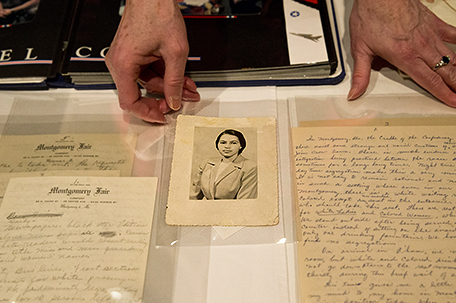 ABOVE PHOTO:  Photographs of Rosa Parks, including this one that is circa the 1950’s, and her letters and writings are part of the Rosa Parks archive as seen during a media preview at the Library of Congress, Madison Building, in Washington, Thursday, Jan. 29, 2015. (AP Photo/Jacquelyn Martin)

WASHINGTON — Rosa Parks wrote at length about her observations and feelings on segregation during the civil rights movement in handwritten accounts that are now being made available to researchers at the Library of Congress. Here are some excerpts:

“City bus lines. Front section reserved for white passengers. Seating space for 10 persons left vacant for white people, whether or not they board the bus enroute to town. The bus driver often passes colored passengers with these empty seats, when he thinks enough are standing in the aisle. This means a larger number will be waiting for the next bus.”

“This thing called segregation here is a complete and solid pattern as a way of life. We are conditioned to it and make the best of a bad situation.”

“In Montgomery, Ala., the cradle of the Confederacy, Heart of Dixie, there exist some strange and varied customs of racial segregation and Jim Crow laws.”

“It is not easy to remain rational and normal mentally in such a setting where even in our airport in Montgomery there is a white waiting room, none for colored except an unmarked seat in the entrance. There are restroom facilities for white ladies and colored women, white men and colored men. We stand outside after being served at the same ticket counter instead of sitting on the inside. … We board the plane and find no segregation.”

“Time begins the healing process of wounds cut deeply by oppression. We soothe ourselves with the salve of attempted indifference, accepting the false pattern set up by the horrible restriction of Jim Crow laws. Let us look at Jim Crow for the criminal he is and what he has done to one life multiplied millions of times over these United States and the world. He walks us on a tightrope from birth.”

“I want to feel the nearness of something secure. It is such a lonely, lost feeling that I am cut off from life. I am nothing. I belong nowhere and to no one. There is just so much hurt, disappointment and oppression one can take. The bubble of life grows larger. The line between reason and madness grows thinner.”