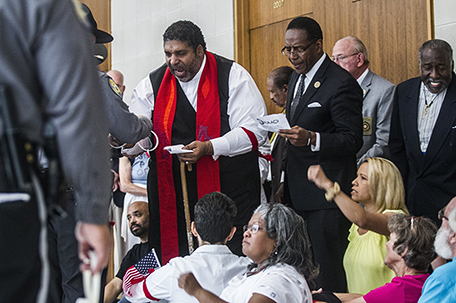 ABOVE PHOTO:  Rev. William Barber II, center, president of the North Carolina NAACP, is arrested in front of Sen. Phil Berger’s office during a sit-in Tuesday, May 30, 2017. More than thirty people were arrested inside the state Legislative Building as they protested Republican lawmakers’ refusal to expand Medicaid coverage. (Travis Long/The News &amp; Observer via AP)

After 12 historic years of leading the North Carolina chapter of the NAACP, the Reverend Dr. William Barber is stepping down from his post and stepping up to the challenge posed by the late Martin Luther King Jr. nearly five decades ago to unite the poor, and put an end to the social inequities and universal indifference that breeds poverty in our nation — and in our world.

Rev. Barber’s activism — powered by morally induced outrage to unjust policies and the abuse of the most vulnerable — has taken on many forms and roles, moving him from national stages to the streets.

As the chief architect of what would become the ongoing “Moral Mondays” movement, an extension of the NAACP’s “Forward Together” movement in the spring of 2013, Rev. Barber stood and protested with impacted people, civil rights activists and community leaders in front of the North Carolina state legislature to challenge discriminatory voter access laws and other state-sponsored attacks on civil rights.

Protestors sang “We Shall Overcome,” held signs, blocked the doors to the Senate chambers, and got arrested. Described in his own words as the “largest state-government-focused civil disobedience campaign in U.S. history,” the first protest would, thankfully, not be the last. Crossing traditional barriers of religion, race, class, political affiliation or sexual orientation, that first Moral Monday inspired tens of thousands of people to lock arms in solidarity and protest beyond the state of North Carolina, undeterred by the very real threat of arrests, with over 1,000 protestors handcuffed and jailed — including Rev. Barber on several occasions.

Under the umbrella of “Repairers of the Breach” — a nonprofit founded by Rev. Barber that develops church and lay people into leaders who strategize and organize for progressive, moral agendas — Dr. King’s “Poor People’s Campaign” will find new life. The new campaign, now known as the “New Poor People’s Campaign: National Call for a Moral Revival,” will pick up where King’s assassination left the nascent movement.

A year before his death, Dr. King shifted his focus to economic inequality, and as he did with civil and voting rights, he was committed to making poverty and the plight of all our nation’s poor a top priority on our federal government’s agenda. Dr. King announced the Poor People’s Campaign at a staff retreat for the Southern Christian Leadership Conference in 1967. He described the campaign as a “highly significant event,” adding that the campaign was “the beginning of a new cooperation, understanding, and a determination by poor people of all colors and backgrounds to assert their right to a decent life and respect for their culture and dignity.”

He planned on descending on our nation’s capital with scores of poor people to demand fair wages, unemployment insurance and quality education. He would not live to join the protestors who would eventually descend on Washington, erect a protest camp and demand economic justice, but the campaign was short lived. We continue to fight for that same justice Dr. King understood is essential to achieve, if our nation was truly committed to giving everyone — regardless of color, gender or zip code, a fair chance at life.

Today, Dr. King’s legacy in the fight for economic justice for all Americans has been passed on to Rev. Barber, and I am pleased that Rev. Barber has answered the call to lead this effort in the affirmative.

As a historic civil rights organization dedicated to economic empowerment for the poor and underserved, The National Urban League will honor Rev. Barber and his long-time commitment to civil rights and justice during our annual conference this year. We live now in worrisome times where a robust movement is afoot to limit Americans’ access to the ballot box, where millions of people worry that they will not have healthcare next year, and where the stock of private prisons continue to soar as the Trump administration finds more people to criminalize and occupy prison beds. So we are fortunate to have men and women on the side of right, like Rev. Barber, who contemplate action in the face of abuse and refuse to remain silent in the face of injustice.