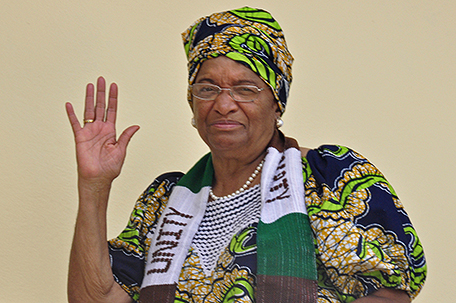 ABOVE PHOTO:  Liberian President Ellen Johnson Sirleaf waves at her home in the city of Monrovia, Liberia, Friday, Oct 7, 2011. Africa’s first democratically elected female president, a Liberian campaigner against rape and a woman who stood up to Yemen’s autocratic regime won the Nobel Peace Prize in recognition of the importance of women’s rights in the spread of global peace. The 10 million kronor ($1.5 million) award was split three ways between Liberian President Ellen Johnson Sirleaf, women’s rights activist Leymah Gbowee from the same African country and democracy activist Tawakkul Karman of Yemen – the first Arab woman to win the prize. (AP/Photo Abbas Dulleh)

One of the most celebrated African leaders in recent memory will soon pass the baton to her successor, sports hero George Manneh Weah, amidst an outpouring of anger and claims of betrayal by members of her Unity Party whose candidate was trounced in Liberia’s recent poll.

For the international community, it seemed unthinkable that Ellen Johnson Sirleaf, the so-called “Iron Lady”, would be ousted from her party. She had presided over a period of peace and economic revival and won critical support from the development community. But the Nobel Peace Prize-winner served at a time of widespread corruption, entrenched after a brutal civil war and a horrific pandemic. Ministers, including family members, were regularly cited for abuse of authority and a hoped-for prosperity failed to materialize for the large majority of citizens.

The devastation Sirleaf inherited when she took office in 2006 was profound. Two decades of dictatorship and civil war had brought the country to its knees: Anyone with the means had left, infrastructure was decimated, and half of all Liberians were displaced, either internally or in neighboring countries. To begin to address all of these problems, Sirleaf had a budget of just $80 million in her first year in office.

“To some degree, she was responsible for fueling those outsized expectations.”

Sirleaf became so toxic at home that on the eve of Liberia’s Oct. 10 general election, her own vice president running for her job, Joseph Boakai, tried to distance himself from her on the campaign trail. “If you park a race car in the garage for 12 years, it gets rusty,” Boakai said, referring to Sirleaf, at a presidential debate. Left unsaid was the fact that he was parked right there beside her for all 12 of those years.

The victory of one-time soccer star Weah has sparked mild panic among some Liberians, international donors and investors over his lack of international experience and for his choice of vice president, the former Mrs. Charles Taylor – a wildcard. 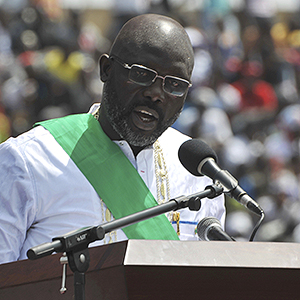 Jewel Howard Taylor, who divorced Charles Taylor in 2006, is not a political novice, however. She established her own political track record, becoming an elected senator in 2005 and the chair of the Senate Health and Social Welfare Committee on Gender, Women and Children. On the campaign trail she promised to rebuild wrecked infrastructure and create jobs for young people — promises made by her ex-husband’s party back in 1997.

An informal survey by the Liberian FrontPageAfrica online, displayed Liberians’ range of reactions. “(Mrs. Sirleaf) restored Liberia’s lost image and did lots of good things for this country; but we the Liberians are ungrateful. Thank God for guiding her to end her tenure successfully and turn over to another government,” said Korku Ballah.

“She served as inspiration for many women and girls in Liberia, Africa and other parts of the world,” said Alex Dahn, founder & CEO of the Liberia Empowerment Vocational Training Program.

David Dunah of Pennsylvania, wrote: “For me, I would go with the recent orator who said “SOME DONE AND SOME NOT DONE.” We enjoyed peace, but the cost of living is hard, we enjoyed good roads in Monrovia but drive to Maryland, Sinoe, Lofa… She encouraged girl’s education but many girls got rape, no justice. On the overall, some got done and some didn’t.”

But a piece under the name Sheikh Al Moustapha Kouyateh contained a long litany of alleged offenses, from the mortgaging of resources (68 concessions), to the failure of institutions to fight corruption (over US$450 million disappearing from the Central Bank of Liberia), to the commercial exploitation of agriculture with Lebanese partners (We no longer grow our own food), to a crackdown on media (Where is Star Radio, Costa FM and many other media institutions that were shut down?).

“I am not against foreigners working in our country but I’m against them coming to take our resources and our land without any production of our resources,” Kouyateh concluded.

“Madam President, thank you for the peaceful transition as I hope that you’ll also mobilize the same wisdom to give accounts to the Liberian people of the embezzlement, injustices, humiliation and other malpractices during your rulership.”

President Weah, the 24th President of the Republic of Liberia, was sworn in on Jan. 22.