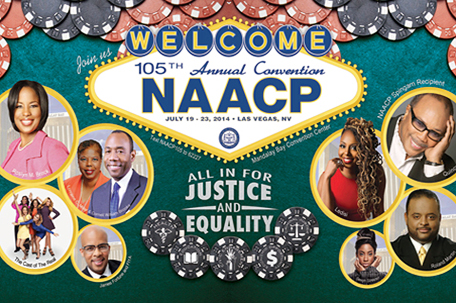 With a “pivotal election” coming up Nov. 4, the NAACP kicked off its 105th Annual Convention last week focusing primarily on maximum Black voter turnout for the mid-term elections.

“All In for Justice & Equality” is the theme of the convention –  held in Las Vegas. Voter suppression, criminal justice reform, voting rights, economic opportunity and educational equality were among the topics on the agenda from Saturday, July 19 to Wednesday, July 23.

Chairman Roslyn M. Brock says that the 105-year-old organization will escalate its traditional strategies with determination to turn out the largest voting force possible.

“In this pivotal election year, it is especially important for us to address voter suppression and the challenges facing communities of color and the nation as a whole. As we tackle important issues like health care, economic opportunity, education and civic engagement, we know that we cannot fully recover as a nation unless we are courageous, stand in solidarity and get out the vote,” says Brock. “The NAACP will continue to educate, mobilize and agitate to create an informed and engaged populace and continue the work in ensuring every American has unfettered access to the ballot box.”

NAACP is a non-partisan organization, but has always fought for Black voter participation given the social, civil rights, and economic justice issues at stake. The Republican Party, which gets only a hand full of Black votes, are determined to win back the majority in the Senate that they lost in 2006 elections. Currently Senate Democrats have a 55-45 majority (including two independents who usually vote with Democrats). Republicans will likely maintain control of the House unless Democrats can pick up at least 17 seats. Democrats have not had a House majority since 2010.

A statement from the NAACP stressed that the convention also occurs on the heels of the “devastating decision” in Shelby v. Holder, June 25, 2013, which gutted Section IV of the Voting Rights Act.

“The civil rights anniversaries this past year remind us how far we have come, and how far we still have to go,” said NAACP former Interim President & CEO, Lorraine C. Miller.  “As we honor the contributions of heroes like Thurgood Marshall, Dorothy Height and Maya Angelou, we also continue to address the new Jim Crow of mass incarceration and the old Jim Crow of voter suppression. NAACP members and partners have never been content to simply memorialize historic icons; in fact, we are inspired and energized by their example for the work that lies ahead.”

The convention also featured the first speech from NAACP President Cornell William Brooks, a civil rights lawyer and AME preacher. He at the first plenary session on Monday.

According to a release, the convention speakers include “well-known as well as the next generation of civil rights leaders, elected officials, faith leaders, actors and community activists.”

“The NAACP is still the most influential and relevant voice in the fight for social justice,” stated NAACP Vice Chairman Leon Russell. “We still face several challenges and we must continue to set the tone for those who believe that the struggle for a greater nation must continue. Our Convention must also re-emphasize the importance of civic engagement as we move into off year elections. The ability to cast an unfettered ballot that is actually counted is perhaps our greatest challenge.”