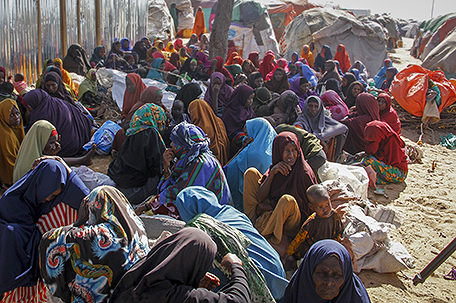 ABOVE PHOTO: Somalis who fled drought-stricken areas sit at a makeshift camp on the outskirts of the capital Mogadishu, Somalia on Feb. 4, 2022. The aid agency Oxfam International warned Tuesday, March 22, 2022 that widespread hunger across East Africa could become “a catastrophe” without an injection of funds to the region’s most vulnerable communities. (AP Photo/Farah Abdi Warsameh, File)

KAMPALA, Uganda — Widespread hunger across East Africa could become “a catastrophe” without an injection of funds to the region’s most vulnerable communities, the international aid group Oxfam warned last Tuesday.

An estimated 13 million people are facing severe hunger in the Horn of Africa as a result of persistent drought conditions, according to the United Nations.

Only 3% of the needed $6 billion has been raised for food assistance amid “competing priorities,” as the world’s attention has focused on the humanitarian crisis in the war in Ukraine, Oxfam International Executive Director Gabriela Bucher said in Kenya’s capital, Nairobi.

“The brutal truth is that at the moment East Africa is not on the global agenda,” said Bucher. The world risks “ignoring one of the greatest crises,” 2022 cannot be the year in which hundreds of thousands die from an unavoidable hunger crisis in East Africa because we couldn’t get this into the agenda.”

Malnutrition rates are high in the region and drought conditions are affecting pastoral and farming communities.

While it “feels like a world on fire,” donors “don’t have to choose. The human rights and humanitarian needs of all people must be met,” Bucher said. “Our world is more than capable of doing so.”

Somalia is particularly vulnerable because it faces sporadic violence and there is concern the situation could deteriorate. Hundreds of thousands of Somalis have already fled their homes in search of help.

About 250,000 people in Somalia died from hunger in 2011, when the U.N. declared a famine in some parts of the country. Half of them were children.

Bucher called for “a life-saving” cash injection to support local responders to cope with the impact of drought conditions.

“A life in Somalia is equal to the life of anyone else in the world,” she said.