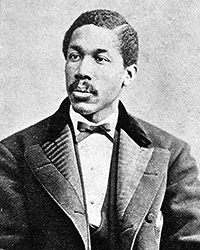 On Oct. 11, Mayor Kenney and Dr. Donald Generals reflect on Octavius Catto’s legacy: The pursuit of freedom & justice is central to our story as Philadelphians

“I look around City Hall, and certainly the people memorialized, there are important people, but there is a space left, and that space belongs to Catto,” Mayor Kenney said. “He was the ‘Dr. King’ and ‘Jackie Robinson’ of his age.”

Octavius V. Catto, an African American Philadelphia educator, organizer and civil rights activist was only 32 years-old when he was murdered on Election Day, October 10, 1871. African Americans males were again able to vote on that day, after the 15th Amendment to the Constitution restored their vote. The assailant fled, and at his trial six years later, he was acquitted of the murder.

Fast forward 145 years, when Philadelphia’s Mayor James F. Kenney is a passionate Catto admirer and champion. Two well-known local journalists, Daniel R. Biddle and Murray Dubin, have emerged as his most prominent biographers. This trio’s dedication to sharing Catto’s leadership achievements shows the extent to which the story transcends a civil rights narrative and speaks to the core value of freedom in Philadelphia.

“Catto was a highly influential African American leader, but it is important to remember he also was a figure central to Philadelphia history and American history,” said Dr. Donald Generals, president of Community College of Philadelphia, said. His funeral, by some accounts, was the biggest and most elaborate ever held for a Black man in America at that time.

This year, Philadelphia will honor Catto on a spot reserved for the city’s illustrious citizens. The Catto Memorial statue is on track for a fall unveiling on the southwest apron of City Hall. This placement, adjacent to the newly renovated Dilworth Plaza, will ensure that millions learn of Catto’s career and community achievements, and continue the conversations he began so long ago.

On Oct. 11, Community College of Philadelphia will set the stage by hosting a panel discussion examining the youthful Catto’s achievements in education and civil rights, and share an overview of his life. In a fitting tribute, the event will make voter registration opportunities available to all Pennsylvanians, as Oct. 11th is the last day in Pennsylvania to register to vote in the Nov. 8th general election.

Mayor Kenney and Dr. Generals will join a dialogue on Catto’s legacy at 1 PM in the Great Hall of the Winnet Student Life Building (on 17th Street, between Spring Garden and Callowhill streets). Biddle and Dubin, authors of the book, “Tasting Freedom: Octavius Catto and the Battle for Equality in Civil War America,” will join them in discussing various aspects of Catto’s life.

“The city has good reason to celebrate as its diverse communities and leaders are gathering together to learn more about Catto and claim him as part of the Philadelphia story. Octavius Catto made the ultimate sacrifice in his pursuit of freedom,” Generals said. “All these years later, his extraordinary quest for justice has managed to bring diverse communities together to discuss challenges like voting rights and education, which remain central to a strong democracy.

“Registering to vote, and exercising our right to vote, is the best way to honor him,” he added.

Community College of Philadelphia is the largest public institution of higher education in Philadelphia and the sixth largest in Pennsylvania. The College offers over 70 degree and certificate programs, evening and weekend classes, and online classes and degree programs. Visit us at www.ccp.edu. Follow us on www.twitter.com/CCPedu. Like us on Facebook at www.facebook.com/ccpedu