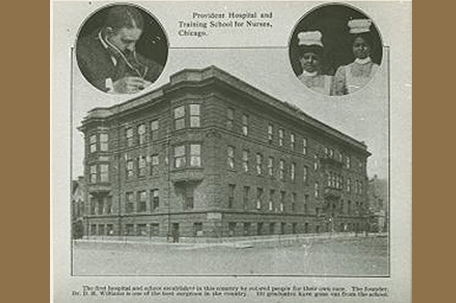 On May 4th, 1891, Dr. Daniel Hale Williams founded the first Black owned and operated hospital in the United States, the Provident Hospital and Training School.

Dr. Williams, a prominent surgeon, had grown tired of the racially discriminatory policies enlisted by White owned and operated hospitals, nursing schools and medical schools. So he decided to start his own medical facility on  Chicago’s South Side.

In 1929, Provident Hospital became an affliliate of Chicago University. As a result, the hospital and training school became a pioneer in Black medical education and hospital reform.  Through the school’s nursing training program, 118 Black students from over 24 states became nurses.

Fundraisers were held to try and reopen the once successful hospital and keep it a Black owned facility, but the efforts came up short. In 1991, the Cook County Board of Commissioners bought the hospital, allowing Provident to reopen its doors. In 1994, Provident, began a relationship with Loyola University, which allowed it to once again become a hub for medical education.

While the hospital and school are no longer Black owned as they were in Dr. Williams’s day, his mission still remains a big part of what Provident Hospital does.