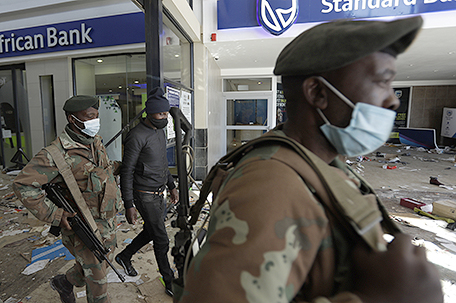 ABOVE PHOTO: Soldiers escort a man suspected of looting from inside a trashed shopping mall in Soweto, near Johannesburg, Tuesday July 13, 2021. South Africa’s rioting continued Tuesday as police and the military tried to halt the unrest in poor areas of two provinces, in Gauteng and KwaZulu-Natal, that began last week after the imprisonment of former President Jacob Zuma. (AP Photo/Themba Hadebe)

By Mogomotsi Magome and Andrew Meldrum

JOHANNESBURG — The death toll from rioting in South Africa rose to 45 on Tuesday as police and the military tried to halt the unrest in poor areas of two provinces that began last week after the imprisonment of former President Jacob Zuma.

Many of the deaths in Gauteng and KwaZulu-Natal provinces occurred in chaotic stampedes as scores of people stole food, electric appliances, liquor and clothing from stores, officials said. Sporadic violence broke out after Zuma on Thursday began serving a 15-month sentence for contempt of court. He had refused to comply with a court order to testify at a state-backed inquiry investigating allegations of corruption while he was president from 2009 to 2018.

The unrest then spiraled into a spree of looting in township areas of the two provinces, witnesses said, although it has not spread to South Africa’s other seven provinces, where police are on alert.

More than 400 people were arrested in Gauteng, but the situation was far from under control, he said.

As he spoke, the broadcast showed police trying to bring order to the Ndofaya shopping mall, where 10 people were crushed to death in a looting stampede. A couple of gunshots could be heard.

Makhura appealed to leaders of political, religious and community organizations to urge people to stop the looting.

At least 19 had been killed in Gauteng, including the 10 at the mall in the Meadowlands area of Soweto, Makhura said.

At least 26 people had been killed in KwaZulu-Natal province, many crushed in the shops, premier Sihle Zikalala told the press on Tuesday.

The deployment of 2,500 soldiers to support the South African police has not yet stopped the rampant looting, although arrests are being made at some areas in Johannesburg, including Vosloorus in the eastern part of the city.

Looting continued Tuesday in shopping malls in Johannesburg township areas, including Jabulani Mall and Dobsonville Mall in Soweto. There also were reports of looting in KwaZulu-Natal.

Authorities have repeatedly warned Zuma supporters and relatives against using social media to encourage the riots.

The Constitutional Court, the country’s highest court, heard Zuma’s application to have his sentence rescinded on Monday. Zuma’s lawyer argued that the top court made errors when sentencing Zuma to prison. After 10 hours of testimony, the judges said they would announce their decision at a later date.