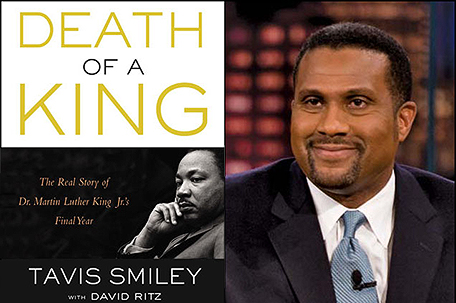 Tavis Smiley is the host and managing editor of Tavis Smiley on PBS, and “The Tavis Smiley Show” from Public Radio International. He is also the author of 16 best-selling books. Here, he talks about his latest opus, Death of a King.

Kam Williams: Hi Tavis, thanks for the time, brother.

Tavis Smiley: Always nice to speak with you, Kam.

KW: I have lots of questions for you from readers. Attorney Bernadette Beekman says: I know that your book deals with the last year of King’s life when the tide was turning against him, such as the Black Panthers, Ralph Bunche, and others in the movement.  Now Dr. King is viewed as a martyr.  Was it difficult for those still living to now speak negatively about King?

TS: Good question, Bernadette. Now that he is a dead martyr, rarely do people speak negatively of him. My point is that it’s easy to celebrate and applaud dead martyrs. The problem is that when King was here and in our faces, and talking about inconvenient truths, like what he called the triple threat facing our democracy–racism, poverty and militarism—everybody turned on him. Yet, 50 years after his assassination, what do we see when we look at Ferguson, Missouri? Racism, poverty and militarism! We have deified King in death, so it’s easy for people to say nice things about him now. But in life, we demonized him.

KW: Harriet Pakula-Teweles says: An historical biography of the last year of Dr. King’s life, no matter how beautiful a tribute, is it really what we need to read now to get it right?

TS: Absolutely! The answer’s “Yes,” because we come to know who we really are in life during the dark and difficult and desolate days of our journey. If you think you respect and revere Dr. King, wait ‘til you read this book. You’re going to feel that way even more so afterwards, because you’ll get to see how he navigated the most difficult period of his life, the last year of his life when everybody turned against him. That’s what fascinates me about him. After reading this book, you’ll have a different appreciation of Dr. King. It’s important to see him in his full complexity, and be honest about the fact that we help to kill King because we abandoned him. And once we abandoned him, we isolated him, which made it easy for someone to assassinate him. It was a three-step process.

KW: Editor/Legist Patricia Turnier asks: Do you have any interest in entering politics?

KW: Patricia also says: I think this is one of your best books. I just finished reading it. I found your discussion of Coretta Scott King’s influence on her husband very interesting, as well as her contributions as an activist, and her criticism of the Civil Rights Movement’s lack of focus, and the roles played by women in combat. About your research process: Did you make trips to Atlanta, Montgomery, the Lorraine Motel and other places in Memphis?

TS: Yes, all of the above. The short answer is I traveled extensively, I interviewed extensively, and I researched extensively. Still, I couldn’t have done this book had it none been for the work of Dr. King’s three principal biographers: Taylor Branch, David Garrow and Clayborne Carson. Those guys did the heavy lifting which made it easier for me to do a book just focusing on his final year. As for Coretta, she’s really an unsung heroine. I’m glad that Patricia took away the critical role that Coretta played not only in Dr. King’s life, but in the Movement. I’m glad that we were able to weave that into the narrative effectively.

KW: Patricia says: You quote Dr. King asserting that “Our nation is sick with racism, sick with militarism, sick with a system that perpetuates poverty.” If Dr. King were still alive, what do you think his assessment of present-day America would be?

TS: Excellent question! He’d pick up right where he left off, talking about that triple threat of racism, poverty and militarism. Even in the era of the first black president, racism is still the most intractable issue in this country. Regarding poverty, half of all Americans are either in or near poverty. Poverty is certainly worse for African-Americans now than it was during King’s lifetime. And there’s a highway into poverty, but barely a sidewalk out. This is not a skill problem, it’s a will problem, and King would be challenging us about the lack of our will to eradicate poverty. On militarism, the growth of the Military-Industrial Complex has been exponential since his assassination. If he were here now, he’d have a strong critique of the American empire’s militaristic approach to the world. And frankly, he’d have a strong critique of the Obama administration on its use of drones.

KW: Patricia says: You wrote that this book meant more to you than any of your others. I consider it an homage to a legend. What do you think is the most important part of Dr. King’s legacy?

TS: I think Dr. King is the greatest democratic, public intellectual that America has ever produced. What’s interesting is that in the U.S., we regard him as an icon, while elsewhere around the world he’s regarded as a revolutionary. They saw him as the radical revolutionary that he really was. Loving your enemy is a radical concept. Here at home, we’ve sanitized and sterilized him, and failed to appreciate him as the revolutionary and prophet that he really was.

KW: Chandra McQueen says: This year marks the 50th anniversary of Dr. King’s winning the Nobel Peace Prize. Do you think Obama is as deserving of his?

TS: I want to be as charitable as I can be, here. It’s been very difficult, sometimes heartbreaking to watch this war President with a Nobel Peace Prize, navigate his presidency.

KW: Have you considered having some of Smiley Books translated into other languages?

TS: We’ve translated some, but we could do more.

KW: Sangeetha Subramanian asks: What was the most surprising fact you uncovered when researching this book?

TS: That for all the surveillance and wiretapping Dr. King was kept under, not one time was he ever heard contesting the humanity of another human being.

KW: Vassar professor Mia Mask asks: What’s up with your campaign against Obama? Isn’t it somewhat self-serving? What, if anything, have you and Cornel West accomplished with your public criticism of the President?

TS: I am not engineering a campaign against Obama. My work and witness is about holding our leaders accountable.

KW: What do you think is the state of black politics in terms of loyalty to the Democratic Party?

KW: David Roth says: I would love to have a chance to chat with you. I am intrigued by the evolution of the post-civil disobedience African-American identity. Please comment on what Dr. Cornel West refers to as the dousing of the “Black prophetic fire” and the subsequent co-opting of the “we-consciousness” of 19th and 20th Century black leaders by the “me-consciousness” of the capitalistic society all Americans operate within. Now that the majority of Black Americans has been assimilated, there is no longer a singular, collective Black voice articulating the call for true equality of opportunity and equal justice under the law, which has led to the marginalizing of the people who raise their voices today.

TS: Dr. West is absolutely correct about the black prophetic tradition of speaking truth to power being on life support.

KW: Kyle Moore asks: What has to be done to change to the political stalemate we see in Washington?

TS: We need to elect leaders who understand that leadership is about loving and serving people, not about self-advancement.

KW: L.A. “Realtor to the Stars” Jimmy Bayan says: You’ve been in Los Angeles for 30 years. What is it that you still find so alluring about our City of Angels?

TS: Great question, Jimmy. The City of Angels is a microcosm of the world, and so living in L.A. makes me feel like a citizen of the world.

KW: Cousin Leon Marquis asks: What was the toughest question you ever had to ask someone?

TS: That’s a question that every one of my guests would have a different answer for, because they all think I ask tough questions. We’ll leave it at that.

TS: We published the book, but for any number of reasons, it didn’t sell enough to make the best-seller list. He was afforded an opportunity to tell his story, and the marketplace decided.

KW: Troy also says: I really enjoyed, and now miss, the Smiley and West radio program. Why was it cancelled? Any plans for a similar program in the future?

TS: It wasn’t canceled. Dr. West and I decided to step away from it, primarily because we both just have so many things going on. We’re both very busy people.

KW: Troy would like to know: What are the future plans of Smiley Books?

TS: We’re going to continue to publish books we think need to be read.

TS: Great question, Armond. I ask that myself everyday.

KW: Thanks for another great interview, Tavis.

TS: Thank you, Kam. I look forward to reading it.

Tavis Smiley– In an introspective mood