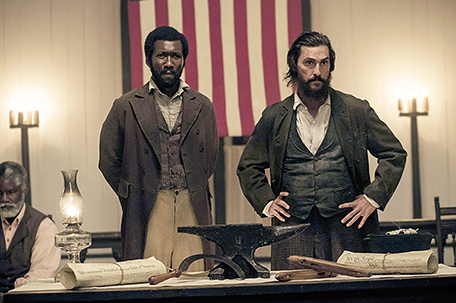 ABOVE PHOTO:  Mahershala Ali with Matthew McConaughey and Gugu Mbatha-Raw in two scenes from Free State of Jones.

Born in Oakland and raised in neighboring Hayward, California, Mahershala Ali received his Bachelor of Arts degree in Mass Communications at St. Mary’s College. He made his professional debut performing with the California Shakespeare Festival in Orinda, California. Soon thereafter, he earned his Master’s degree in Acting from New York University’s prestigious graduate program.

Ali is fast becoming one of the freshest and most in-demand faces in Hollywood with his extraordinarily diverse skill set and wide-ranging background in film, television, and theater. Last fall, he wrapped Brad Pitt and Adele Romanski’s independently-produced feature film, Moonlight, as well as reprised his role in The Hunger Games: Mockingjay – Part 2, the final installment in the Hunger Games franchise, alongside Jennifer Lawrence, Donald Sutherland, and Julianne Moore. As District 13’s Head of Security, ‘Boggs’ guides and protects Katniss through the final stages of the district’s rebellion against the Capitol.

On television, Ali was recently cast in Netflix’s “Luke Cage” in the role of Cornell “Cottonmouth” Stokes. He can also be seen on the award-winning Netflix original series “House of Cards”, where he’s reprising his fan-favorite role as lobbyist and former press secretary Remy Danton.

Mahershala’s previous feature film credits include The Place Beyond the Pines opposite Ryan Gosling and Bradley Cooper, Crossing Over starring Harrison Ford, John Sayles’ Go For Sisters, and David Fincher’s The Curious Case of Benjamin Button.

On television, he appeared opposite Julia Ormond in Lifetime’s “The Wronged Man” for which he subsequently received an NAACP Nomination for Best Actor. He also had a large recurring role on Syfy’s “Alphas”, as well as the role of Richard Tyler, a Korean War pilot, on the critically-acclaimed drama “The 4400”.

On the stage, Ali appeared in productions of “Blues for an Alabama Sky,” “The School for Scandal”, “A Lie of the Mind”, “A Doll’s House”, “Monkey in the Middle”, “The Merchant of Venice”, “The New Place” and “Secret Injury, Secret Revenge”. His additional stage credits include appearing in Washington, D.C. at the Arena Stage in the title role of “The Great White Hope”, and in “The Long Walk” and “Jack and Jill”. 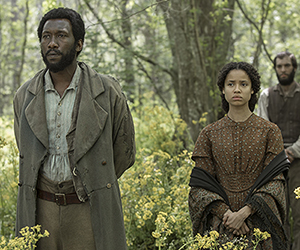 Kam Williams: Hi Mahershala, thanks for the interview.

KW: What interested you in Free State of Jones?

MA: The story, first off. I had never heard of Newton Knight. So, the narrative as a whole was really attractive to me because it was a refreshing departure from the homogeneous depictions of the Civil War where the North wanted to abolish slavery while the South wanted to keep it intact. Here, you had an example of a Southerner who spoke out against slavery during the war and who later became an activist for civil rights and this new idea of equality for all people regardless of one’s skin call, race or creed.

MA: I had never seen a character in this time period who had such agency and mobility for someone living in the South. He had run away with a group of former slaves and was really living life on his own terms in the swamps. And he was determined to be pro-active in his people’s emancipation. Also, seeing his evolution over the course of the narrative really inspired me. He’s a disenfranchised, runaway slave with no education who learns to read and write and really becomes a leader and an active participant in the democratic process who mobilizes others. His were big shoes to fill, but they were ones that I was very excited to step into.

KW: How was it working with such an accomplished cast that included Matthew McConaughey, Gugu Mbatha-Raw, Keri Russell and Brendan Gleeson?

MA: It was very inspiring and also humbling. It was a difficult shoot, being in the swamps in both the heat and the cold for four months, but everybody arrived ready to go, all-in and totally committed. It all started with Matthew and Gary [director Gary Ross] who had a wonderful energy and approach to the work every day that trickled down to the rest of the cast and crew. Everyone was aware of and inspired by the importance of the story we were telling, and that was another added layer that contributed to the focus that everyone had.

KW: And how was it being directed by a four-time Oscar-nominee in Gary Ross?

MA: Pretty phenomenal, starting with the audition process. he was very curious about my ideas in terms of fleshing out the character, and he also wanted to know my perspective as an African-American and whether I felt it reflected the African-American experience. And it was mind-blowing and empowering how Gary wanted to portray African-Americans participating in their own liberation. So, I would work with him again at the drop of a hat.

MA: That the struggle for freedom continues. And if you’re a person like Newt, it becomes your responsibility to empower those in close proximity to you.

MA: The Great White Hope. I would love to redo that film in a way where it would be more focused on Jack Johnson.

MA: I’m not much of cook, but I cook a mean bowl of oatmeal.

MA: I remember choking on the core of an apple while being bathed in a large sink by my dad. He slapped me on the back until I coughed it up.

MA: My parents and my grandparents. My mom was extraordinarily present, but I’m so appreciate of all of them.

MA: I grew up in church. My mom’s a minister, and my grandmother was an ordained minister. I was always very mindful of the presence of a greater being I call God.

KW: How were you affected by the passing of Muhammad Ali?

MA: I was very affected by it. He was my first hero. I was mesmerized by his photos and his presence, even though he was retiring around the time I was becoming conscious of him. He was 100 percent my first hero and idol.

MA: Hold tight to the mentality of being a student, meaning hold on to curiosity and approach life as a student.

MA: Working at Kentucky Fried Chicken. I was apple to save up and by my first car over the course of that summer.

MA: Commit myself to this journey of becoming an actor. It takes a lot of love and support and wonderful allies. But I don’t necessarily recommend it.

MA: No one ever asks me what inspires me. What inspires me today is a desire to get closer to an understanding of what my artistic capacities are with the hope of organically sharing my gifts with an audience in the most heightened way I possibly can.

MA: They tend to believe in themselves and to be really impassioned. The people that I admire have a wonderful balance of self-belief and humility.

MA: To really be conscious of how long the journey is, be patient, push yourself, persevere and always be working on your craft while waiting for your break. That’s what I’m still working on, having done this for 20 years now.

MA: I guess as someone who was always looking to grow and improve in all the aspects of my life, from acting to being a good family man to embracing the spiritual tenets that I choose to practice. I always hope to be a better person tomorrow than today.

KW: Thanks again for the time, Mahershala, and best of luck with the film.

To see a trailer for Free State of Jones, visit: https://www.youtube.com/watch?v=y_38WdArR20