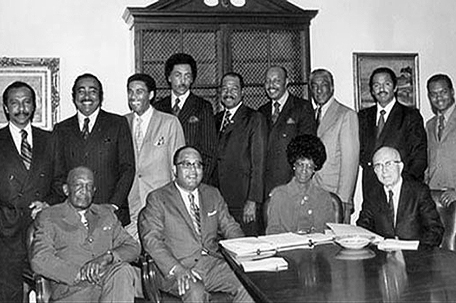 Fifty years of service to the nation

During the late 1960s, Rep. Charles Diggs (D-Mich.) created the Democracy Select Committee (DSC) in an effort to bring Black members of Congress together. Diggs noticed that he and other African American members of Congress often felt isolated because there were very few of them in Congress and wanted to create a forum where they could discuss common political challenges and interests.

“The sooner we get organized for group action, the more effective we can become,” Diggs said.

The DSC was an informal group that held irregular meetings and had no independent staff or budget but that changed a few years later. As a result of court-ordered redistricting, one of several victories of the Civil Rights Movement, the number of African American members of Congress rose from nine to 13, the largest ever at the time, and members of the DSC decided at the beginning of the 92nd Congress (1971-1973) that a more formal group was needed.

“The thrust of our elections was that many black people around America who had formerly been unrepresented, now felt that the nine black members of the House owed them the obligation of also affording them representation in the House,” Rep. Louis Stokes (D-Ohio) said. “In addition to representing our individual districts, we had to assume the onerous burden of acting as congressman-at-large for unrepresented people around America.”

Shortly after the CBC was established, its battle with President Richard Nixon began. After President Nixon refused to meet with the group, the CBC decided to boycott the 1971 State of the Union Address, which made national headlines.

“We now refuse to be part of your audience,” Rep. William Lacy Clay, Sr. (D-Mo.) wrote to President Nixon on behalf of the caucus, explaining that President Nixon’s refusal to meet with the caucus was evidence that the Administration wasn’t interested in helping the African American community.

The CBC’s decision to fight its battle with President Nixon publicly worked in the caucus’ favor and became a strategy the CBC would return to again and again. President Nixon eventually agreed to a March 1971 meeting with the caucus. During the meeting, the CBC presented President Nixon with 61 recommendations to eradicate racism, provide quality housing for African American families, and promote the full engagement of African Americans in government.

“Our people are no longer asking for equality as a rhetorical promise,” Diggs said. “They are demanding from the national Administration, and from elected officials without regard to party affiliation, the only kind of equality that ultimately has any real meaning—equality of results.”

Press coverage of the meeting and the events leading up to it introduced the CBC to the nation. A few years later, in 1973, the CBC would be among the first members of Congress to call for President Nixon’s impeachment.

The CBC is often called the “Conscience of the Congress” for being the first to stand up and speak out about issues that Congress needs to examine or reexamine. This was the case with Apartheid in South Africa, an issue that African and African American activists and founding members of the CBC became involved in decades before Congress passed the Comprehensive Anti-Apartheid Act of 1986 (CAAA).

In 1959, Diggs became the first African American chairman of the House Subcommittee on Africa. He used his role as subcommittee chairman to increase awareness of political and social issues in southern Africa, South Africa in particular. In fact, the hearings Diggs held as subcommittee chairman helped mobilize African and African American activists and gave them a platform to offer alternatives to long-standing U.S. foreign policy in South Africa.

Apartheid was a major concern for the founding members of the CBC. In 1972, Rep. Ronald Dellums (D-Calif.), one of the founding members of the CBC, introduced the CBC’s first anti-apartheid bill. The purpose of the bill was to establish the CBC’s anti-apartheid position and to end apartheid and other racist practices in South Africa. Although the bill was unsuccessful and it would be more than a decade before Congress passed the CAAA, Dellums and other CBC members continued to introduce anti-apartheid legislation.

In 1985, Rep. William H. Gray (D-Pa.), chairman of the House Committee on Budget and a member of the CBC, introduced a bill that prohibited loans and new investment in South Africa and enforced sanctions on imports and exports with the nation. In 1986, Rep. George Crockett (D-Mich.), another member of the CBC, introduced a resolution that called on South Africa to free Nelson Mandela and other political prisoners, and to recognize the African National Congress as the political voice of South Africa’s black majority. Both measures were unsuccessful.

In 1986, nearly 14 years after Dellums introduced his legislation, the House passed anti-apartheid legislation, the CAAA. Bills introduced by Dellums, Gray, and Crockett served as the bases for CAAA. The CAAA imposed sanctions on South Africa and included preconditions for lifting those sanctions, among them the release of all political prisoners, including Nelson Mandela. President Reagan vetoed the bill, but Congress overrode his veto because support for the bill was so strong. This was the first time in the 20th century that a president had a foreign policy veto overridden.

“Even though we think first of those we were directly elected to serve, we cannot, in good conscience, think only of them—for what affects one black community, one poor community, one urban community, affects all,” the CBC wrote to Nixon in 1971.

It is this sentiment that reflects the CBC’s role as “Conscience of the Congress,” a role that the caucus began to play at its founding and a role the caucus still plays today.

“On the challenges of our times…on the threats of our time…members of the CBC have been leaders moving America forward,” President Obama said at the Congressional Black Caucus Foundation’s 45th Annual Phoenix Awards Dinner in 2015.

He continued, “Whatever I’ve accomplished, the CBC has been there. I was proud to be a CBC member when I was in the Senate, and I’m proud to be your partner today.”