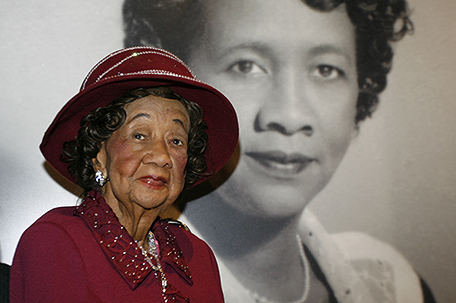 ABOVE PHOTO:  Dorothy Irene Height, who served as President of the National Council of Negro Women for 40 years until 1997, sits in front of her featured story board inside the “Freedom’s Sisters” exhibition at the Cincinnati Museum Center in Cincinnati. (AP Photo/David Kohl)

The U.S. Postal Service announced last week, civil rights leader Dorothy Height will be honored as the 40th stamp in the Black Heritage Forever series. The stamp features artist Thomas Blackshear II’s gouache and acrylics on board portrait of Height. The painting is based on a 2009 photograph shot by Lateef Mangum. Art director Derry Noyes designed the stamp.

Height was a tireless activist who dedicated her life to fighting for racial and gender equality. She lived a remarkable life that was in service to her community but African-American women in particular. Although she rarely gained the recognition granted her male contemporaries, she became one of the most influential civil rights leaders of the 20th century. She was the president of the National Council of Negro Women for forty years and was awarded the Presidential Medal of Freedom in 1994. 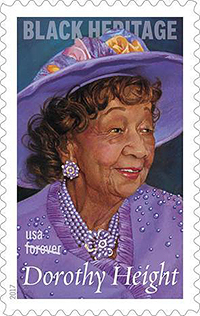 In 1990, Height, along with 15 other African Americans, formed the African-American Women for Reproductive Freedom. She served as national president of Delta Sigma Theta sorority from 1947 to 1956; was the chairperson of the Executive Committee of the Leadership Conference on Civil Rights; and an honored guest at the inauguration of President Barack Obama on January 20, 2009, where she was seated on stage.

Height is the 15th African American woman to appear in the series. The stamp will be available in 2017.

The National Council of Negro Women (NCNW) was founded on December 5, 1935, with the support of the leaders of 28 of the most notable black women’s organizations. The founder and president until 1949, Mary McLeod Bethune, envisioned a unified force of Black women’s groups fighting to improve racial conditions nationally and internationally.

The NCNW focused on gathering information, making credible contacts, and sponsoring education programs. The most notable effort in the 1930s was the 1938 White House Conference on Governmental Cooperation in the Approach to the Problems of Negro Women and Children.  Beginning with this conference, representatives of the NCNW began to regularly visit the White House to call for more Black female administrators in upper-level government positions.

In the 1940s, the NCNW engaged in a series of activities including the campaign to desegregate the armed forces and assisting women globally during World War II. In 1941, the NCNW became a member of the U.S. War Department’s Bureau of Public Relations under the Women’s Interest Section where they lobbied for black women in the U.S. Army. By 1942, The Women’s Army Corps (WAC) accepted African American women, admitting them into the service overseas in the 688th Central Postal Battalion. They also launched education campaigns, urging Black workers to improve their job skills and to maintain professional attitudes and appearances. In its concern for minority women around the world, the NCNW advocated U.S. participation in the United Nations.

Mary McLeod Bethune (center front) and members of the NCNW in the 1940s. (Photo: Public Domain)

In 1949, Mary McLeod Bethune was succeeded by Dorothy Boulding Ferebee who refocused the group’s efforts toward using the legal system to gain Black rights and promote voter registration and education.  The NCNW also lobbied for women’s rights legislation, federal aid to education, establishment of a national health-care system, and a permanent Fair Employment Practices Commission (FEPC) to prevent racial discrimination in employment.

In 1953, Vivian Carter Mason was elected president. Mason centralized the structure of the NCNW and was successful in making local councils adhere to NCNW guidelines. During its restructuring, the NCNW increasingly embraced interracial cooperation with White women and with other women of color.

Four years later, in 1957, Dorothy Irene Height became the fourth president, a position she held until her retirement in 1997. In the beginning of Height’s administration, the NCNW explored new methods to finance and otherwise support the emerging Civil Rights movements.  Height also personally became one of the major architects of the Movement’s strategy.  With the passage of the Civil Rights and Voting Rights Acts in 1964 and 1965, the NCNW shifted its focus to the economic problems affecting black women.  After receiving tax-exempt nonprofit status in 1966, the NCNW began to train a number of Black women for volunteer community service, help low-income Black women in job training, address the problems surrounding black youth, and initiate efforts to help poverty-stricken southern black farmers. By the 1990s the NCNW centered its efforts on youth violence, teenage pregnancy, and drug abuse as well as care of the elderly.