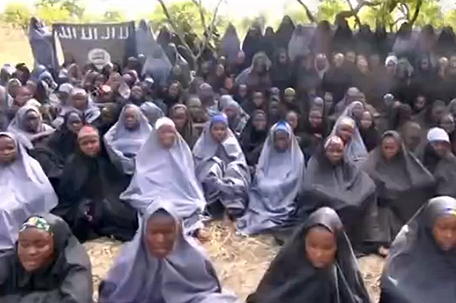 ABOVE PHOTO:  In this video grab from Touchvision it is believed that these are the abducted Nigerian teen girls.

President Goodluck Jonathan has “made it very clear that there will be no negotiation with Boko Haram that involves a swap of abducted schoolgirls for prisoners,” Mark Simmonds, British foreign office minister, told journalists in the Nigerian capital, Abuja.

But Nigeria’s government will talk to the militants on reconciliation, Simmonds said, talking after a meeting with Jonathan.

“The point that also was made very clear to me is that the president was keen to continue and facilitate ongoing dialogue to find a structure and architecture of delivering lasting solution to the conflict and the cause of conflict in northern Nigeria,” Simmonds said.

He spoke before Nigeria’s Defense Ministry announced that extremists had again attacked the remote northeastern town of Chibok, from which the schoolgirls were abducted on April 15.

The ministry said several insurgents and four soldiers were killed in the firefight Tuesday.

Soldiers who were there told The Associated Press that at least 12 soldiers were killed, and that angry soldiers later fired at the car carrying a senior officer who came to a review of the bodies Wednesday. The witnesses spoke on condition of anonymity because they want to keep their jobs.

The ministry said the soldiers fired into the air in protest.

Boko Haram abducted more than 300 schoolgirls from a school in Chibok in the northeastern state of Borno on April 15. At least 276 of the girls are still being held captive by militants who have threatened to sell them into slavery, sparking outrage at home and abroad over the government’s apparent failure to rescue then.

In a video released on Monday, Boko Haram’s leader says he will free the girls only if the government releases jailed members of his group. The footage was verified as authentic by Nigerian authorities, who said 54 of the girls had been identified by relatives, teachers and classmates who watched the video late Tuesday.

Nigerian government officials have given conflicting responses to Boko Haram’s offer of a swap.

One senior official said on Tuesday that “all options” are now open – including negotiations or a possible military operation with foreign help – in efforts find the missing girls.

It was not immediately possible to confirm Simmonds’ comments with Nigerian officials.

Reuben Abati, a spokesman for the Nigerian presidency, said in a statement late Wednesday that Jonathan met with Simmonds at the presidential palace in Abuja to discuss the missing girls and Britain’s role in trying to rescue them. The statement said Simmonds “reassured President Jonathan of Britain’s commitment to giving Nigeria all required assistance to find and safely rescue the abducted girls.”

Britain and the U.S. are actively helping Nigeria’s government to find and rescue the girls.

The British government has said a team of security experts sent to Nigeria will consider “not just the recent incidents but also longer-term counter-terrorism solutions to prevent such attacks in the future and defeat Boko Haram.”

Boko Haram has killed more than 1,500 people this year in a campaign of bombings, massacres and mass kidnappings.