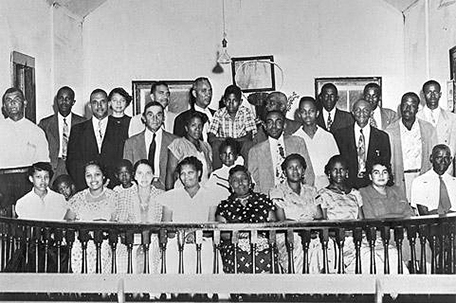 In honor of Black History Month, Nathaniel Briggs spoke at the Riverside Presbyterian Community Center to commemorate one of the most iconic struggles and triumphs this country has ever known. Briggs is the youngest son of Harry and Eliza Briggs, two of the original plaintiffs in the Briggs v. Elliot case, referred to at the time by many Southern segregationists as “the original sin”. The 1949 case was later combined with four other similarly structured cases and argued at the U.S. Supreme Court by Thurgood Marshall as Brown v. Board of Education.

“The NAACP and Thurgood Marshall asked for 20 names — 20 people willing to sign a petition and withstand any pressure that would come towards them,” Briggs said.

The brave families in Clarendon County did just that. Despite their gallant efforts, historians often bypass the contributions that the other four cases had in the groundbreaking decision. The Briggs case fundamentally destroyed the ‘separate but equal’ doctrine that the Plessy v. Ferguson decision provided, thereby making segregation unconstitutional.

The Briggs case began in Summerton, South Carolina. The case received some attention when Ossie Davis, Ruby Dee and Sidney Poitier wrote the play, “The People of Clarendon County”. Some of the facts of the play were lost to artist interpretation and misguided information. The Briggs Family however, has been dedicated to correcting the pages of fiction with facts. Nathaniel Briggs has made it his mission to acknowledge all of the original plaintiffs in this historical case.

The incentive for the case began when the parents of the children of the Scott Branch School in Clarendon County made several attempts to purchase school buses for their children, who were forced to walk miles to school on dirt roads in dangerous conditions. After the school board took the money, the parents collected and allocated those funds to the White children, the parents took action.

The families asked Reverend DeLaine, a family friend to speak on their behalf. Although Reverend DeLaine’s children did not attend Scotch Branch, he graciously offered to join in the movement alongside Reverend Seales, a  local pastor to many of the families. The community of Clarendon county was comprised of mostly farmers. Nathaniel Briggs spoke about some of the challenges his parents and the other families experienced on their quest for justice. Retaliation was swift and severe. The original plaintiffs lost jobs, houses, cars, revenue and in some cases — their lives.

“My parents paid this price, never really understanding what it meant to enjoy the fruits of their labor… but their struggles was for our kids today,” Briggs stated. “They put their lives on the line and were willing to not have certain things in life. Neighbors that signed the petition that mortgaged their houses, had those houses taken from them. Farmers would go to the bank to borrow money to plant their crops for the season. When the crops came in, they would pay the banks back, but these farmers were denied those loans, which compromised their ability to feed their families.”

The attacks on the plaintiffs and Reverend DeLaine came in waves. After an attack by the KKK where Reverend DeLaine’s house was burned down, DeLaine was aided by some of the plaintiffs in escaping the south. During that escape, “Big” William Ragin shot a Klansman, and stayed behind to protect his family in Clarendon County.

The parents of Clarendon County eventually hired Thurgood Marshall as their lawyer. On May 17, 1954, the Supreme Court ruled that separate was not equal, thus ending school segregation in America. Nathaniel Briggs spoke passionately about his desire to continue to honor the legacy and history of all parties involved.

“The people that paid this price and won the battle of separate is not equal in the school system, the media just passed right by them, and forgot the fact that it all started with a petition in South Carolina in 1949,” Briggs said. “This was the first case of Brown v. Board of Education. A lot of folks know about Brown v. Board, but they don’t know about the other five cases. The NAACP and the people that ran their legal defense fund had to make a decision to either challenge the power of the South, petitioning the school system in South Carolina, or go to Kansas, where the schools were already integrated. It was an easier case to attack the power of the Midwest than the power of the South, which is what they did.”

“My goal is to enlarge our stories from 1,000 to 100,000 stories. We set out to share as many stories as possible. We want the children, grandchildren, great grandchildren and all of the generations to follow, to know the sacrifices that their families made in this effort,” Briggs added.

“It was a community that stood up against tyranny to change the course of history.”

Nathaniel Briggs’ mother and father, Harry and Eliza Briggs, were awarded with the Congressional Gold Medal posthumously.  “The Briggs v. Elliot case holds a particularly significant place in my family’s history. My great grandparents,  Edward and Sarah Ragin, were also two of the original plaintiffs in the 1949 Briggs v. Elliot case. Edward Ragin and his two daughters, Shirley and Delores Ragin, were given the Merit Award in 1951 by the South Carolina NAACP chapter to honor the part they played in the fight against segregation. I am honored to carry their name and legacy.”

The Briggs family hopes to have a federal marker placed on I-95 in Clarendon County, South Carolina with all of the names of the plaintiffs that risked everything for change.  It is our duty to honor the sacrifices of those that came before us by sharing their stories.

A South Carolina story about hope

Lifting the veil, revealing the voice