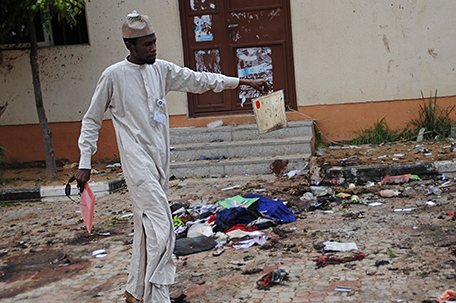 ABOVE PHOTO:  A man picks up an item belonging to a student at the site of a bomb blast in the university town of Zaria, Nigeria, Tuesday, July 7, 2015. A bomb blast in Nigeria’s northern university town of Zaria killed dozens of people Tuesday, including a 2-year-old toddler, the Kaduna state governor reported, the latest in a string of deadly bombing and shooting attacks by the Boko Haram Islamic extremist group.  (AP Photo)

ZARIA, Nigeria — A bomb blast in Nigeria’s northern university town of Zaria killed at least 25 people Tuesday including a 2-year-old toddler, the Kaduna state governor reported, the latest in a string of deadly bombing and shooting attacks by the Boko Haram Islamic extremist group.

Witnesses said the blast came from a female suicide bomber and that as many as 40 people died.

“I saw three truck-loads of body parts taken away by the police,” said Aisha Mohammed, who was in the hall at the government headquarters where the explosion occurred Tuesday morning.

Some bodies were charred beyond recognition, according to an AP reporter at the morgue.

Gov. Nasir El-Rufai urged citizens to avoid crowded public places including mosques and churches as the militants accelerate the pace of attacks that have killed some 300 people in a week. Boko Haram may be responding to an Islamic State group order to commit more mayhem during the Muslim holy month of Ramadan.

“Terrorists detonated explosives that killed and injured several persons … (with) 25 fatalities including a 2-year-old,” El-Rufai said.

He said the Cameroonians seized a large quantity of weapons and vehicles before the attackers retreated to Nigeria.

Boko Haram wants to install an Islamic state across Nigeria, a nation of about 170 million people divided between a predominantly Muslim north and Christian south. The extremists say democracy has brought nothing but woes to Africa’s biggest oil producer and richest economy.

Nigeria’s police force announced heightened security around mosques and churches and said they are setting up roadblocks in and out of major cities and towns because of undisclosed information received in an intelligence report.

The attacks come just five weeks into the administration of President Muhammadu Buhari, who has vowed to crush the insurgency that has killed more than 13,000 people and driven 1.5 million from their homes.