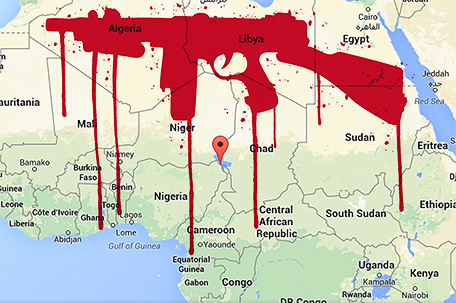 As many as 2,000 civilians were killed and 3,700 homes and business were destroyed in the Jan. 3 attack on the town near Nigeria’s border with Cameroon, said Amnesty International.

The leader of Nigeria’s Islamic extremists took responsibility for the killings in a video posted on YouTube Tuesday, the same day International Criminal Court prosecutor Fatou Bensouda said she is examining the allegations of mass killings and will prosecute those most responsible for war crimes and crimes against humanity in Nigeria.

“We are the ones who fought the people of Baga, and we have killed them with such a killing as He (Allah) commanded us in his book,” Shekau says, according to a translation from Arabic provided by SITE Intelligence Group.

The video shows weapons supposedly captured from a key military base at Baga.

“This is just the beginning of the killings. What you’ve just witnessed is a tip of the iceberg. More deaths are coming,” said Shekau in the local Hausa language.

“This will mark the end of politics and democracy in Nigeria,” he warned as the country gears up for critical Feb. 14 presidential elections.

The attack on Baga has sparked international outrage not seen since Boko Haram kidnapped nearly 300 girls from a boarding school in April last year. Nigeria’s demoralized and ill-equipped military has failed to rescue the 219 who remain in captivity.

Neighboring Cameroon has had more success in combating Boko Haram, this month retaking a seized military base and this week winning freedom for scores of abducted women and children. On Wednesday the secretary general of the Economic Community of Central Africa States met with Cameroon President Paul Biya and said the regional body would assist Cameroon in fighting Boko Haram, saying it is important to “wipe out the terrorist organization.”

In neighboring Niger, regional foreign ministers Wednesday were negotiating how to establish a multinational force to fight the extremists.

Shekau taunts them in the video, saying “I’m ready” for any attacks.

Baga was headquarters for a multinational force but Chad and Niger abruptly withdrew their troops without explanation and only Nigerians were there when the extremists struck, according to Nigeria’s military chief.

Boko Haram crisis: Why it is hard to know the truth in Nigeria