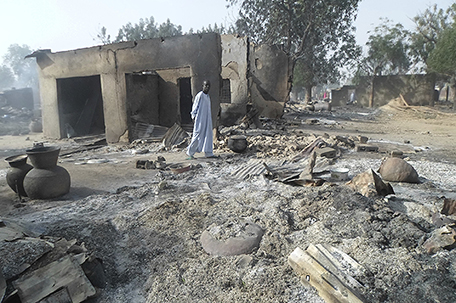 ABOVE PHOTO:  A man walks past burnt out houses following an attacked by Boko Haram in Dalori village near Maiduguri. Nigeria-based Boko Haram extremists have killed more than 380 people in the Lake Chad region since April, a major resurgence of attacks that has resulted in double the casualties compared to the five months before April, Amnesty International said Tuesday, Sept. 5, 2017. (AP Photo/Jossy Ola, File)

DAKAR, Senegal–Nigeria-based Boko Haram extremists have killed more than 380 people in the Lake Chad region since April, in a major resurgence of attacks that has doubled the casualties compared to the previous five months, Amnesty International said Tuesday.

The spike in attacks by the Islamic extremists is a result of increased use of suicide bombers — often women and girls — who carry out the attacks in highly populated areas in Cameroon’s Far North region and Nigeria’s Borno and Adamawa states, the rights group said. Cameroon has experienced at least one suicide attack per week, it said.

“Boko Haram is once again committing war crimes on a huge scale, exemplified by the depravity of forcing young girls to carry explosives with the sole intention of killing as many people as they possibly can,’’ said Alioune Tine, Amnesty’s director for West and Central Africa. “This wave of shocking Boko Haram violence, propelled by a sharp rise in suicide bombings, highlights the urgent need for protection and assistance for millions of civilians in the Lake Chad region.’’

Nigeria’s military have pushed more Boko Haram fighters from the Sambisa Forest in Nigeria to the Mandara Mountains in Cameroon, a possible explanation for the increased attacks in Cameroon, Amnesty said. Boko Haram extremists have been crossing into and attacking towns in neighboring countries, including Cameroon and Niger, that contribute to a regional military force trying to eliminate the insurgency.

Nigeria and Cameroon’s governments should take swift action to protect civilians in need of humanitarian assistance, said Amnesty. Boko Haram’s increased attacks have made it difficult to carry out humanitarian operations, it said.

Boko Haram has killed more than 20,000 people during its eight-year insurgency. The violence has displaced at least 2.3 million people in the region, Amnesty said, adding that 7 million are facing serious food shortages.

“The international community should also rapidly scale up its commitment to provide life-saving humanitarian assistance to the millions in the region who need it,’’ said Amnesty’s regional director Tine.

Nearly 800,000 children are severely malnourished in Nigeria, Niger, Cameroon and Chad and the lack of sufficient humanitarian funding is putting children’s lives at risk, the Norwegian Refugee Council said in a separate statement Tuesday.

World leaders met six months ago and committed to give $2.2 billion for basic humanitarian needs in the Lake Chad region, but 57 percent of those funds are still lacking as violence forces more people from their homes, the group said.