Boko Haram crisis: Why it is hard to know the truth in Nigeria 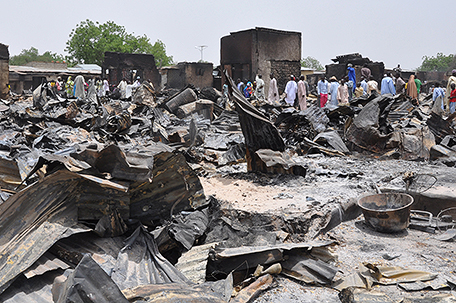 ABOVE PHOTO:  In this Sunday, May 11, 2014 file photo, people stand outside burnt houses following an attack by Islamic militants in Gambaru, Nigeria. Thousands of members of Nigeria’s home-grown Islamic extremist Boko Haram group strike across the border in Cameroon, with coordinated attacks on border towns, a troop convoy and a major barracks. Further north, Boko Haram employs recruits from Chad to enforce its control in northeastern Nigerian towns and cities. In Niger, the government has declared a “humanitarian crisis” and appealed for international aid to help tens of thousands of Nigerian refugees driven from their homes by the insurgency. (AP Photo/Jossy Ola, File)

It is not easy to find out the truth in Nigeria.

The Baga killings last week are a case in point, with politicians and government officials offering vastly different information – from 150 dead to 2,000.

News of another attack by Islamist militants from Boko Haram often starts as a vague one-liner as was the case on January 3: “Attack on Baga. Loud gunfire heard.”

This first bit of information often comes via social media. The challenge now is to find out the details and there are plenty of obstacles in the way of getting to the truth.

First up there has been no mobile phone connection in Baga for many months after the jihadists attacked mobile phone masts in the north-east.

There are of course the officials whose job it is to tell the world what is going on.

But for the first few days of the Baga crisis both the military spokesmen and government officials were silent or not picking up calls.

Then, often with help from colleagues from the BBC’s Hausa service, the goal is to get through to people who have witnessed the violence.

On January 4, we spoke to a man who had walked for two days through the bush, eventually getting a lift to the relative safety of the biggest city in the area, Maiduguri, on a lorry.

“There was shooting from every corner of the headquarters of the multinational task force,” he tells me, adding that the exchange of fire lasted hours.

Then there are more testimonies from witnesses who say the military base was overpowered and then the gunmen started killing civilians in Baga town.

But every witness we speak to is fleeing for their life. They are not hanging around Baga to check exactly what’s happening so it is hard to be sure we are getting facts.

Then a local politician from the area weighs in with more accounts of people being shot in Baga and others dying as they fled, their boats capsizing on Lake Chad.

“I don’t know how many people have been killed,” says Senator Maina Maaji Lawan, who represents Borno North.

“But at least 70 percent of the area I represent is in Boko Haram hands.”

Four days after the attack and there is still silence from the government and the military.

Then some journalists manage to meet the chief of defence staff, Air Chief Marshal Alex Badeh

It is not an organized news conference but a hurried exchange in a car park.

He is asked about the attack on the military base in Baga.

“Of course there was an attack,” he shoots back.

Can we retake Baga? Badeh is asked.

“Why not?” is the short reply. Seconds later he ducks into his car and is driven off.

It is an unusual way for the capture of Baga to be confirmed officially although it is worth noting this is the same very senior military official who told us a few months ago that a ceasefire deal had been reached with Boko Haram which turned out to be totally untrue.

More eyewitnesses fleeing Baga are telling the BBC about hundreds of bodies on the streets of Baga.

Another local politician says 2,000 are dead. But he is not there to count them – nobody is because it is far too dangerous – so it is hard to believe him.

Meanwhile in Paris news breaks of, initially at least, 12 people being shot dead by gunmen. Within minutes President Francois Hollande is speaking to the world’s media offering some clarity and leadership.

“This is an act of exceptional barbarism,” he begins and says security measures are in place to apprehend the perpetrators.

Ten days since Baga was first attacked and there have also been several suicide bombings.

But we have not heard a word from Nigerian President Goodluck Jonathan – except for a statement condemning the Paris attacks.

The finance minister also appears keener to comment on events far away that have killed far less people.

“Terrible incident. Our deepest sympathies to the journalists and their families. We are one with France in mourning,” tweets Ngozi Okonjo-Iweala with the hash tag #JeSuisCharlie.

Meanwhile local TV stations follow every twist and turn of the presidential election campaign – some are lengthy programmes sponsored by rival political parties.

The media seem far more focused on the Valentine’s Day vote. That seems to be where the politicians are focused too.

On Monday evening the government put out a statement saying “the number of people who lost their lives during the Baga attack has so far not exceeded about 150”.

But we may never know how many have died in and around Baga.

We know there will never be an investigation that will reveal the truth.