Black Panthers celebrate 50th anniversary, looking at then and now 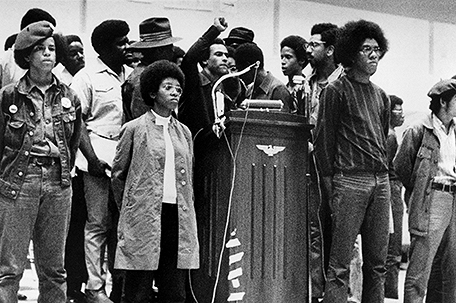 ABOVE PHOTO:  Huey P. Newton, national defense minister of the Black Panther Party, raises his clenched fist behind the podium as he speaks at a convention sponsored by the Black Panthers at Temple University’s McGonigle Hall in Philadelphia, Pa., Saturday, Sept. 5, 1970. He is surrounded by security guards of the movement. The audience gathered is estimated at 6,000 with another thousand outside the crowded hall.  (AP Photo)

Violent clashes between police and people of color. Cries of racism, economic inequality, a swell of outrage and protest. Is it 2016, or 1966?

It was 50 years ago this month, against a similar a backdrop of civil unrest, that Oakland junior college students Huey Newton and Bobby Seale penned the Ten-Point Program of the Black Panther Party for Self Defense, a manifesto demanding respect, justice and basic human rights for African-Americans.

From that grew a radical political force not seen before in this country, eventually drawing thousands of members nationwide at its peak in the late 60s. The party’s fierce rhetoric and militant tactics — “policing the police” with armed patrols in Oakland neighborhoods — made for bold headlines and a violent reputation. It drew fire from local police and the federal government, with FBI Director J. Edgar Hoover calling it “the greatest threat to the internal security of the country.”

At the same time, the Panthers formed alliances with other oppressed groups — even poor whites — and rank-and-file members quietly developed community programs, health clinics, schools, voter registration drives and provided free breakfasts for children, planting seeds for many social programs we have today.

Half a century later, several surviving original Panthers still in the East Bay hosted a three-day conference Oct. 20-23 at the Oakland Museum of California titled “Where Do We Go From Here?” with panels, workshops and concerts. The former members, now in their late 60s, mid-70s and beyond, looked back at Panther history but also forward, hoping their legacy will inform young activists.

The conference coincided with the museum’s major exhibit “All Power to the People: Black Panthers at 50,” opening Oct. 8, with rarely heard stories of the rank-and-file, video interviews and various artifacts, including the original handwritten draft of the 10-point party platform, looking at what was accomplished, what failed and what it means for today.

“Our 50th is significant, partly because there aren’t many of us left,” said Oakland’s Elaine Brown, 73, a former chairwoman of the Black Panther Party in the 1970s and current human rights activist. “We have this one last opportunity for us to come together and leave something valuable.”

And the timing is crucial, she added. “Yes, we have a Black president and a few prominent entertainers and sports players. But when we look at the status of Blacks today, our economic development, social status, police shootings of unarmed Black men, all these same things that were present in 1966 — people are angry.

“The Black Panther Party didn’t form in a vacuum,” Brown said. “There was a mood then, and there’s a mood now.”

The decade was ripe for revolutionary ideals: the Vietnam War, the Black Power Movement, civil rights demonstrations in the South, the assassination of Malcolm X, the Watts Riots and more. And despite passage of the Civil Rights Act of 1964 — which made discrimination in voting and employment illegal and ended segregation in most public facilities — African Americans in poor communities still suffered from bigotry and injustice, frequently at the hands of law enforcement.

In 1966, Seale, 30, and Newton, 25, canvassed people in poor Oakland neighborhoods about housing, education, incarceration levels, police relations. They studied leftist ideologies from the Cuban Revolution to Maoism, starting their platform with “We want Freedom. We want power to determine the destiny of our Black community.” 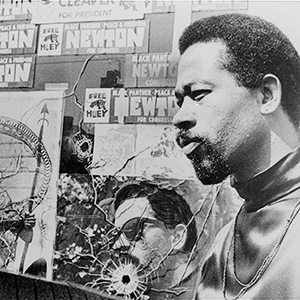 Black Panther leader Eldridge Cleaver, candidate for president on the Peace and Freedom Party ticket, stands beside his bullet riddled campaign poster in the window of Black Panther headquarters, September 11, 1968. A picture of Huey Newton, far left, convicted of voluntary manslaughter in the death of an Oakland policeman, was also riddled by bullets. No injuries resulted from the shooting, but two Oakland policemen were fined and face court action as a result. (AP Photo)

But it wasn’t until spring of 1967 when the Black Panther Party for Self Defense, as it was originally called, burst onto the national scene, with members carrying loaded weapons into the state capitol in Sacramento. The idea was to protest a gun control bill and the police killing of a Black Richmond man. But it was also to get in the papers. And it worked; hundreds of new recruits signed on. And after the 1968 assassination of Martin Luther King Jr., which former party members call “our 9/11,” the party’s ranks swelled and chapters formed across the country.

“It was time to exercise our constitutional rights,” said former Panther member James Mott, 67, who now goes by the name Saturu Ned. “Our movement was a profound effort for freedom and social change by Black people in the United States.”

But not everyone thought so.

“The negative impressions are so common, to this day,” said Rene de Guzman, curator of the Oakland museum exhibit. “The prevailing perception is militant at best, criminal at worst.”

Indeed, the iconic image of Newton in black beret and leather jacket, sitting in a wicker chair with a rifle and a defiant brow, was seared into the country’s collective memory. Yet the Panthers place blame for their outlaw reputation, and the party’s ultimate demise in 1982, on the FBI’s efforts to implode the organization from within. The federal agency’s COINTELPRO (Counter Intelligence Program) was set up in the 1950s to disrupt activities of the Communist Party but expanded to various political groups in the ’60s, including the Panthers. FBI operatives infiltrated the party, creating paranoia among the ranks, initiated raids of Panther offices around the country and conducted heavy surveillance of members.

A striking portrait of these techniques is seen in artist Sadie Barnette’s work, featured in the Oakland museum exhibit. Barnette is the daughter of Panther member Rodney Barnette, who co-founded the Compton, California, chapter. She obtained her father’s FBI files — a hefty 500 pages — and turned them into a multimedia work of “wallpaper” art.

“It shows the lengths COINTELPRO went to, how many states they visited to talk to my dad’s childhood neighbors, teachers, co-workers, how many informants fed them false information,” she said. “It’s really disturbing.”

But there was also trouble caused within the group itself. In past interviews, retired Oakland police officers noted extortion of local businesses and attacks on police.

In 1967, Newton was arrested for the murder of Oakland police officer John Frey during a traffic stop. Though Newton was convicted of voluntary manslaughter, his conviction was later overturned because of faulty jury instruction. The trial generated large daily protests to “Free Huey” and made international news.

In 1968, Bobby Hutton, 17, the party’s first recruit, was killed after a shootout with police. Since then, locals have called DeFremery Park in West Oakland “Bobby Hutton Park,” and the city just officially renamed a portion of the park “Bobby Hutton Grove.” By the end of 1969, 28 party members around the country had been killed.

As chaos, paranoia and violence within the group increased in the early 1970s, the party began to fall apart, splitting into rival factions. Key members left. Newton fled to Cuba in 1974 while on bail awaiting trial for the murder of an Oakland teenager, and Seale resigned that same year, hoping to “kill the party,” he said in a previous interview. After many years out of the limelight, during which he battled to overcome drug and alcohol addictions and earned a Ph.D. in social philosophy at UC Santa Cruz, Newton was fatally shot outside a drug house on a West Oakland street in 1989.

“The way you experienced the party was largely dependent on where and when you joined,” said UC Berkeley’s Ula Taylor, professor of African-American studies. “Things were different in, say, Seattle than in Chicago or Oakland. It also depended on your role in the party, whether you were rank and file or leadership. Most of the rank and file never even met Bobby or Huey.” 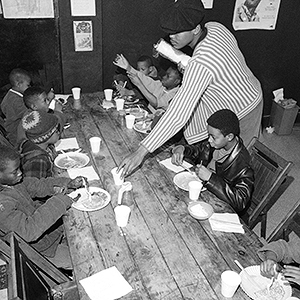 While the charismatic leaders made the headlines, it was the rank and file who staffed the Panther’s “survival programs,” regularly giving out hundreds of bags of groceries and clothing, providing breakfasts for kids who usually went to school hungry, opening health clinics, organizing rent strikes, helping poor families with pest control and setting up the first widespread testing for sickle cell disease.

“Just like with a corporation, you had the leaders, and then you had excellent project managers,” Ned said, adding that the survival programs were initiated with a goal. “It was survival pending revolution. The idea was to eliminate these basic needs so people could focus on organizing and working for the cause. If you’re hungry, getting food is all you’re going to think about.”

And the struggle wasn’t just black and white.

“Maybe the most misunderstood aspect is the party’s stance on racism,” said historian and Ohio State University professor Curtis Austin, author of the 2006 book “Up Against the Wall: Violence in the Making and Unmaking of the Black Panther Party.”

“The public thought — and many still do — it was basically a reverse KKK, out to kill white people. But they made alliances, trying to include all people, poor whites, Native American people, Asians. It was in reality an inclusive fight.”

“We linked arms; we looked at the big picture,” Brown said. “We had alliances with the Young Patriots, who were rural white Americans, the Brown Berets, the Young Lords from back East, AIM (American Indian Movement), farmworkers, disabled rights groups, gay rights groups.

“We all need food, housing. These were common denominators and still are,” she said. “When the Occupy presence started, they identified one big thing that hasn’t changed: America has classes and most of us are not in the top of them.”

Ned said the racial tension in the country and police shootings of Black men have given renewed relevance to the goals laid out in the Panther’s Ten Point Program. But does that mean the party is ripe for a comeback?

“No,” Ned said. “But we feel we’ve come full circle. Young people contact us; there’s a demand for our presence in every arena. People saw Beyonce referencing the Black Panthers at the Super Bowl.

“We want to reach those people who want to know more about the concepts, the ideas, the structure of what we were doing,” he said. “That’s what we can pass on.”