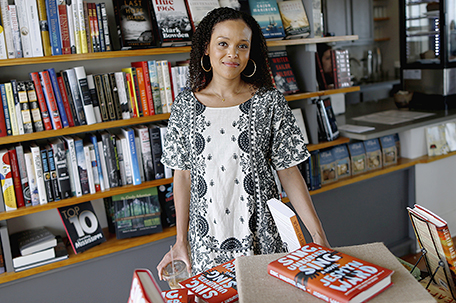 NEW ORLEANS–An African-American novelist praised for her raw and powerful depictions of poor African-Americans confronting racial and economic inequalities in the rural South said last Wednesday that winning a MacArthur fellowship gives her time and freedom.

“I think those are the two most important gifts you can give to an artist,’’ Jesmyn Ward said in a video Wednesday from Tulane University, where she’s a professor. “So I am deeply humbled and also overjoyed.’’

Hours earlier, the Chicago-based John D. and Catherine T. MacArthur Foundation announced she was among 24 recipients of the so-called genius grants, which bestow $625,000 on each winner over five years.

Ward was the 2011 recipient of the National Book Award for her second novel, “Salvage the Bones,’’ about the struggles of a poor African-American family in her native Mississippi, set against the backdrop of Hurricane Katrina’s strike on the Gulf Coast.

The author grew up in DeLisle, Mississippi , a community of about 1,100 residents where more than a third live below the poverty line. Her three novels to date have been set in a fictional Mississippi coastal town called Bois Sauvage.

Now 40, Ward said she’s currently working on a novel set in early 1800s New Orleans at the height of the domestic slave trade.

“It’s a novel unlike anything that I’ve written. … I’m a little nervous, afraid, but also aware of the fact that this novel will make me grow and evolve as a human being, and I’m looking forward to that,’’ Ward said.

The MacArthur Foundation praised Ward as a “fiction writer exploring the bonds of community and familial love among poor African- Americans in the rural South.’’ It added she “captures moments of beauty, tenderness, and resilience against a bleak landscape of crushing poverty, racism, addition, and incarceration.’’

The announcement also cited her portrayal in “Salvage the Bones’’ of the struggles of a poor family with teen pregnancy, a missed opportunity to attend college and other experiences. That book also was among recipients of the American Library Association’s Alex Award for adult books that appeal to teens.

Her first novel, “Where the Line Bleeds,’’ was published in 2008 and was a finalist for two awards. Her third, “Sing, Unburied, Sing,’’ is among five finalists for this year’s National Book Award, which will be made in November.

In 2014, while Ward was teaching creative writing at the University of South Alabama, her memoir “Men We Reaped’’ was a National Book Critics Circle finalist for autobiography. She came to Tulane later that year as a tenured associate professor of English.

The writer is nearing the end of a two-year break from teaching at Tulane University after winning the $200,000 Strauss Living award in January 2016.

Tulane spokesman Roger Dunaway said he had not heard Wednesday whether Ward plans to extend her leave after winning the MacArthur grant.