Black, gray and gay: The perils of aging LGBTQ people of color 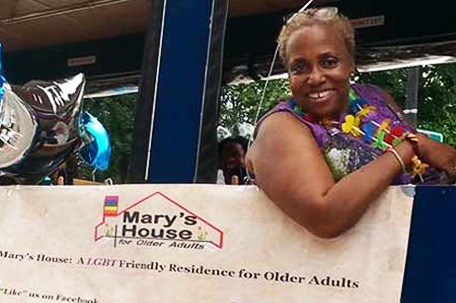 WASHINGTON,D.C.–Cecelia Hayden Smith, 72, knows exactly how she wants to live out the remainder of her golden years: lounging lazily on the porch of a cozy house tucked along a quiet, treelined street in Washington, D.C.

She’d greet her partner each morning with a homemade country breakfast, and their afternoons and evenings would be filled with lively games of Spades and Bid Whist with a dozen or so housemates — all fellow LGBTQ elders.

“I’ve already picked out my rocking chair,” the retired substance-abuse counselor quipped. “Just call me ‘Mama C,’ and make sure my room is in the front, so I can always see everything going on, and I’m happy.”

For now, her dream is in stark contrast of her reality. She and her partner of 30 years, a 78-year-old woman whose names she prefers not to mention, have had health challenges, forcing them to live on a fixed budget in pricey Washington, D.C.

They can only afford to live in a crumbling six-bedroom townhome, which they share with three middle-aged and older straight and lesbian women. After the basics, much of their income is spent on health care and, often, an ever-growing list of repairs for the house, which has been in her partner’s family for more than six decades.

Hayden Smith and her partner are among the estimated 2.7 million adults age 50 and older in the U.S. who self-identify as lesbian, gay, bisexual, transgender and queer (LGBTQ) — about 1.1 million are 65 and older. Approximately 20 percent of LGBTQ older adults are people of color, a number expected to double by 2050.

Although economic, social, physical and mental health disparities are high among all LGBTQ older adults, the complexities of race, age, sexual orientation and gender identity are especially challenging for many Black LGBTQ elders. Advocates say public policy changes, such as the Trump administration’s promised repeal of the Affordable Care Act, which in its most recent version includes deep cuts to Medicaid, will make their predicament worse.

“We’ve got LGBTQ [status] and age, so we really have two oppressions against us,” explained Imani Woody, PhD, age 65, an African- American lesbian and LGBTQ activist in Washington, D.C. “And when you put race and gender on top of that, it just gets harder. It gets to a point where you wake up and say, ‘Which fight am I going to fight today?’”

One-third of LGBTQ older adults live at or below 200 percent of the federal poverty level, including 40 percent of African- American LGBTQ older adults, according to one groundbreaking report co-authored by Services and Advocacy for GLBT Elders (SAGE), the nation’s oldest and largest advocacy group for LGBTQ elders, and LGBTQ think-tank Movement Advancement Project (MAP) released in May.

Advocates attribute the economic disparities of Black LGBTQ elders to longstanding race, age and LGBTQ discrimination, which have been exacerbated by a lack of equal protection under the law and social stigma.

Neglect and isolation are especially prevalent when their peers — the only support network many of them have due to family rejection — die off or age themselves, as research shows older LGBTQ adults are less likely to be partnered or married or to have children to depend on as caregivers.

Fredriksen-Goldsen explained that both groups “reported higher levels of spirituality than non-Hispanic whites, and spirituality was found to be associated with their well-being. The findings indicate distinct challenges and resilience among LGBTQ older adults of color.”

In addition, a 2014 SAGE report found African- American LGBTQ older adults were four times more likely than their Hispanic and white counterparts — 26 percent versus 8 percent — to consider people from their churches or faith groups as part of their support systems.

Jenna McDavid, of the Diverse Elders Coalition, said this information provides a great opportunity: “Exploring more ways for faith communities to be inclusive could be monumental for so many elders in need of support,” she said.

While many advocates say the legalization of same-sex marriage has been helpful to the well-being of LGBTQ elders, many who have not married still struggle to receive the financial and family protections afforded to unmarried, different-sex couples – especially after their partner dies or suffers a chronic illness.

Nursing homes and other long-term care facilities are especially problematic for black LGBTQ elders, according to Kenneth Mitchell, 62, a Black gay man living in New Orleans. “The fear of abuse and discrimination [is so strong that many] end up going back into the closet,” he said.

“People need to be able to be their true selves; being fearful and stressed impacts your quality of life and your physical and mental health,” added Mitchell, who serves as a board member for New Orleans Advocates for GLBT Elders (NOAGE).

Cedric Burgess, 65, a Black gay man in Washington D.C., agreed that a fear of backlash and discrimination pushes many to retreat. “It’s not the same as being a young gay person; there’s less to do, and many of our peers have died from the AIDS epidemic,” he said. “One of the biggest concerns is isolation and suicide. People need people to talk to.”

To that end, groups around the country such as NOAGE, SAGE and GRIOT Circle, a nonprofit focused on the needs of older LGBTQ people of color, host regular social events to engage LGBTQ elders.

In the nation’s capital, Imani Woody is trying to do her part to help LGBTQ elders. One way the advocate is trying to do so is by making that cozy retirement house Hayden Smith dreams of a reality. She’s currently raising money to transform her childhood home into Mary’s House, an affordable, independent living home for LGBTQ elders in Washington, D.C.

The plans call for 15 efficiency units, a “stone wall” on the grounds commemorating the 1969 Stonewall Inn Riots and a yellow brick road — a nod to days past when gay men would clandestinely identify each other by asking, “Are you a friend of Dorothy?”

Hayden Smith and Cedric Burgess are ambassadors for Mary’s House, which they both eventually hope to call home for themselves and fellow LGBTQ elders of color for many years to come.

“It’s tough out there, but at least at Mary’s House they’ll have a family and a place to call home,” Woody said.

Chandra Thomas Whitfield wrote this article for NBCBLK, the NBC network’s African- American-focused website, with support from the Journalism in Aging Fellows program of New America Media and the Gerontological Society of America, and sponsorship from The Commonwealth Fund.