Black dads are overcoming obstacles for self, children and community (part two) 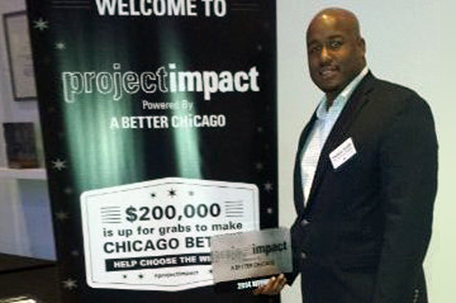 Simon defied the odds and overcame through his strong faith in God and study.  He immersed himself in things that were positive, otherwise he would have imploded. He chronicled his journey in his book, “The Deferment of Hope: A Story of Exile, Faith and Redemption,” in hopes his story may help other men overcome their own ordeals.

With his psychology degree as a tool, Simon counsels and mentors others. He also facilitates various self-help groups and runs a therapy group called “Thinking Toward Change” for people who have been incarcerated.

His father was a good dad whose work in the animation industry meant long periods away from home, sometimes up to six months a year. Simon gravitated to gangs and activity that landed him in prison. But before incarceration, after his daughter’s birth, he also stopped going to his old neighborhood, and got two jobs working six days a week in security and bagging groceries.

“My problem was the discipline that it takes to stand up under that kind of pressure or stress was something that had not been taught to me, something that I did not yet have,” Simon said.

Their Skid Row neighborhood in Gladys Park is exactly where many Black fathers are gaining strength and empowerment not just on Fathers’ Day, but throughout the year, said activists during a June 13 celebration of homeless dads.

The 14th annual Fathers’ Day celebration featured a 3-on-3 basketball tournament, breakfast and lunch, music and above all, fellowship, activists said.

Approximately 200 men over age 40 and over on Skid Row began organizing in 1996 to do something for the children there. The Fathers’ Day Celebration was the one activity they found could keep everyone together, said Manuel Benito Compito of OGN Service Association.

“The reason why the 3-on-3 tournament became good is because Blood and Crips play out here, and through basketball we were able to unite them and through that still be able to honor them as fathers and stay in touch with them,” he said.

“One thing about Skid Row is that most people think men down here are dead beat dads. That’s just the stereotype image, but I’ve got 13 grandkids, eight kids. I take care of all my kids and every man you see being honored here today, they take care of their kids,” Compito said.

They’ve made a difference in the lives of Dwayne Freeman and Haylie, his 4-year-old daughter. “Parenting as a homeless Black man is rough, but I’m hanging in there for her,” he said. “Housing and just getting people to listen to us, at least down here, is challenging,” he said of his one year wait.

Freeman spent eight years in prison and was released in 2005. He and Haylie’s mother separated before learning she was pregnant, but they are working out their parenting responsibilities without court or child support agency involvement, he said.

OGN Service Association helps the men cope through constant mentoring, Compito said, pointing to the basketball court-classroom where the men shot hoops and warmed up. “This is where they mentor each other because everybody’s going through something. Somebody lost their woman … Someone’s been to the penitentiary, gone through college, lost his job, so we mentor to each other,” he continued.

The greatest challenge for homeless men is the belief that without a job or money, they can’t be a part of their children’s lives, but that’s not true, Compito added.

“A lot of times your kids just want that time, but a lot of men feel their self-worth is down here,” Compito said. “They’re sleeping on the streets, and their self-esteem is gone but we teach them no! Go see your kid!”

Gladys Park is far safer than it used to be. Black men who led cleanups as part of the Skid Row Positive Movement began hosting community activities there and people began trusting them. They helped give people something constructive to do when the city wouldn’t, argued “General” Jeff Paige, a Skid Row activist.

Contrary to prevalent negative images of Skid Row, there’s regular life going on, he said, and that’s in large part due to Black men’s efforts to lift and protect the community.

Their work as the Gladys Park Improvement Project resulted in a Nike basketball court, chess tables, shade structures, fitness equipment and even a self-cleaning public toilet. “In Skid Row we created over a half million dollar project, so that’s what we can do for self,” Paige stated.

Sheldon Smith, founder and director of the Dovetail Project, created the Chicago-based program to help high risk youth who are fathers through a 12-week curriculum. It features guest speakers who teach the fathers about the roles, rights, and responsibilities of fatherhood, their importance in the lives of their children, and how to avoid incarceration.

“Many of these young men grow up and have children and want to become the best fathers that they can, but fatherhood doesn’t come with a map or a manual,” Sheldon said.

Young fathers are really trying to find their way but there are no jobs or resources, particularly pertaining to fathers, and that puts them in a hole, he said.

Smith started the Dovetail Project after falling in love with community organizing through M.A.G.I.C. (Metropolitan Group for Igniting Civilization), a non-profit youth development and advocacy group on Chicago’s Southside. He worked on education, youth and gang violence, juvenile justice, and at age 20, he learned he was having a daughter. Smith wanted to create an initiative that supported young fathers between the ages of 17-24, particularly Black fathers, because he found none that really supported them.

“You would think because a man is 23- or 24-years-old, he doesn’t need anyone to hold his hand, but when you are struggling because you don’t know what that map or manual looks like to be a successful dad, and you are lacking the mentorship that you need to just be a great man in general, you are seeking that,” Smith said.

The Dovetail Project, which is a volunteer initiative, just held its 2015 Fatherhood Training Class graduation on June 11 at the community room at WVON 1690AM, Chicago’s Black talk radio station. Graduates received a $300 stipend, a certificate, and a job or GED certificate.

Smith urged a greater focus on fatherhood, and more than just one day a year.

Although few fathers outside the home could say they did this every day, Black dads were the top hygiene helpers (12 percent, compared to 6 percent for Whites and 7 percent for Latinos).

The Pew Research Center found 62 percent of all Black fathers read to their children at least several times per week. Black dads in the CDC survey who didn’t live with their children were more than twice as likely as their White counterparts to host story time every day. These same “absent” Black dads were significantly the most likely to talk to their school-age children about their day—more than 50 percent reported having done so several times per week or more, compared to 34 percent of absent White dads and 23 percent of absent Latino fathers.

According to CDC, Black patriarchs are the likeliest of all men to be stay-at-home dads (13 percent of Black dads who live with their children stayed at home), while 29 percent of Black38 fathers are single heads of households.

The percentage of children living apart from their fathers has more than doubled in the past 50 years, according to Pew research, but absent doesn’t mean uninvolved. And in some cases, absent Black fathers were the most involved of all.

(Jazelle Hunt of the NNPA Newswire contributed to this report.)

Black dads are overcoming obstacles for self, children and community (part one)