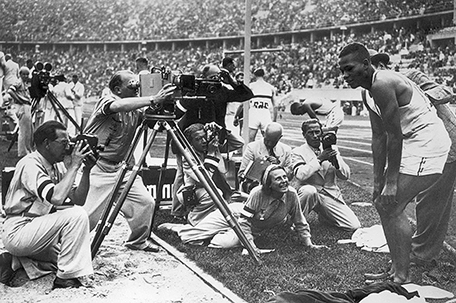 ABOVE PHOTO:  Archie Williams with reporters after win.

Eighty years ago, a grand total of two Black American women athletes, Tidye Pickett and Louise Stokes, both in track and field, traveled to the 1936 Olympics in Berlin, where Jesse Owens won four gold medals. Because his victories debunked Adolf Hitler’s pronouncements of Aryan supremacy, many believe Owens was the only Black American Olympian there.

“He wasn’t alone,” says filmmaker Deborah Riley Draper. “There were 17 other people.” Her documentary, “Olympic Pride, American Prejudice,” tells the stories of Pickett, Stokes and the other Black American Olympians with Owens.

Nine of them also won medals in the Nazi capital. Some did so with Owens. Some competed against him. Some didn’t compete with him at all.

Draper found their stories accidentally while researching the life of American trumpeter Valaida Snow, who shared her tale after being interned during Hitler’s rise. Snow’s positive comments about the Black American Olympians in Berlin sparked Draper’s curiosity. It took the former advertising executive four years to put the puzzle together. That puzzle is chock full of stunning archival footage, interviews with some of the Olympians’ children, and even actual audio from Olympians Williams and LuValle. In fact, their words help narrator Blair Underwood, also an executive producer, tell the story.

“It’s remarkable to have their voices and to have them kind of guide you through their experience through Berlin. It kind of feels like you’re having that conversation with Archie or Jimmy,” Draper says. 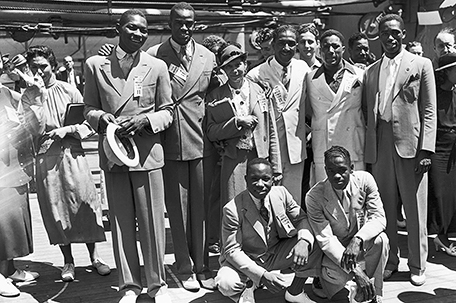 Digging through the archives of the 1984 Los Angeles Olympics, Draper found interview transcripts and then hunted down the corresponding audio. As demonstrated in her breakthrough Black-model-focused 2012 documentary, Versailles ’73: American Runway Revolution, Draper has a knack for letting her subjects speak for themselves. That was easy in Versailles ’73; her subjects were still alive. It is decidedly more difficult when all the subjects are dead. But Draper is committed to letting Black people speak, even if it is about the 1930s where their voices are harder to find.

“I don’t like anyone to speak for me, so I don’t want to take someone else’s voice from them because I don’t like my voice taken from me,” Draper says. “I think that’s a respect thing.”

“He looked for seven years to find footage of his mother and was unsuccessful, and he was a cameraman for NBC for 30 years,” says Draper, who found the footage in archives in both Los Angeles and Berlin.

When he did see his mother, Draper says, “He cried a lot. He saw his mom on the boat, and he saw his mom getting off the bus. He saw his mom in the stadium, the Nazi stadium, sitting there next to Mack Robinson. His mother. And he said he was so proud. Just seeing her reminded him of just how amazing his mother was.”

That kind of response is what keeps her Atlanta-based Coffee Bluff Productions grinding. (Draper named the company after a historic stretch of her native Savannah.) Olympic Pride premiered theatrically in New York and Santa Monica on August 5. It is also available on Comcast’s Xfinity Streampix and can be pre-ordered on Amazon. A 10-city expansion is in the works for September.

If Draper and those like her hope to continue to buck the Hollywood mainstream, she says, the public will have to step up and massively support these movies.

“We need a movement to elevate the film in the consciousness of people who want to see this type of film. We need folks on Facebook (1936OlympicsMovie) to tell us they like the film,” Draper says.