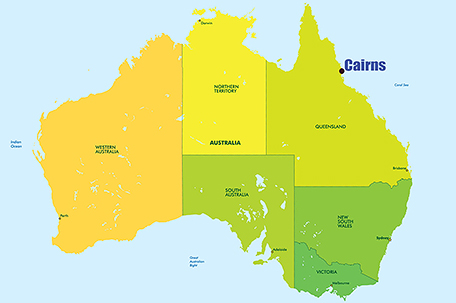 SYDNEY — An Australian woman was charged with murder on Sunday in the deaths of seven of her children and her niece, whose bodies were found inside her home, police said.

Mersane Warria, 37, was charged with eight counts of murder in a bedside hearing at a hospital in the northern city of Cairns where she is recovering from stab wounds, Queensland state police said.

Police were called to the home in the Cairns suburb of Manoora on Friday morning after receiving a report of a woman with serious injuries. When they got to the house, they found the bodies, along with Warria, who was suffering from stab wounds to the chest.

Police haven’t said how the children died, but Queensland Police Detective Inspector Bruno Asnicar said they’re examining several knives in the home that may have been the weapon used to kill them. Suffocation was also a possible cause of death, he said.

“We are considering that and that’s why it’s taking a bit of time,” he said. “It could be a range of things, from suffocation to a thousand other things.”

Officials were still trying to determine exactly what happened inside the house, and had collected more than 100 witness statements, he said. A coroner was conducting autopsies, but police would not be releasing the results as the The children, four girls and four boys, ranged in age from 2 to 14. Warria is the mother of seven of them; the eighth is her niece.

Police were not looking for any other suspects, Asnicar said. A hearing was scheduled for Monday, but Warria was excused from attending. Police planned to oppose any request for bail, Ascinar said.

“This is very raw and it is a very emotive time for everybody,” he said. “The family is deeply upset but the community is pulling together. “

Asked how the children’s five fathers were coping with the tragedy, Ascinar replied: “I don’t think we need much imagination to understand how they are feeling.”

Dozens of weeping mourners visited a makeshift memorial of flowers, stuffed animals and candles set up in a park next to the family’s home. “My babies, my babies,” one man wailed.

A church service was held on Sunday morning to honor the children and a candlelight vigil was scheduled for the evening.

The tragedy comes as Australia is still reeling from the shock of a deadly siege in a Sydney cafe. Last week, a gunman burst into the cafe in the heart of the city and took 18 hostages, two of whom were killed along with the gunman after police stormed in 16 hours later to end the standoff. Police had earlier said there were 17 hostages in the cafe, but revised the number after a new count.

“The news out of Cairns is heartbreaking,” Prime Minister Tony Abbott said in a statement. “All parents would feel a gut-wrenching sadness at what has happened. This is an unspeakable crime. These are trying days for our country.”