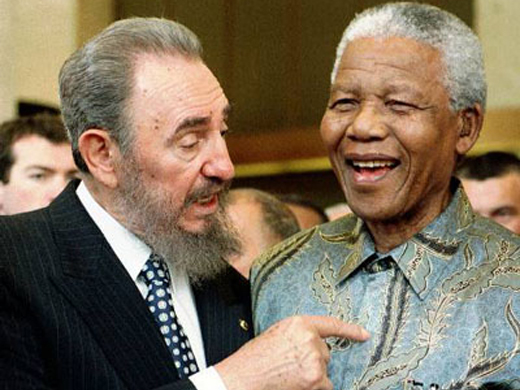 ABOVE PHOTO: Cuban leader Fidel Castro, left, shares a laugh with the late South Africa President Nelson Mandela at the World Trade Organization held in 1998 in Geneva. Mandela and Castro said in separate speeches that the global trading system had failed to achieve its goals of bringing a higher standard of living to many developing countries. (AP Photo/PATRICK AVIOLAT)

With the raising of the U.S. flag at the American embassy in Havana, Cuba, the two nations are resuming diplomatic relations after a severing of ties that lasted over half a century. The U.S. embassy had been shuttered since 1961. The normalization of relations provides a perfect time to examine the contentious history the island nation has shared with its behemoth Yankee neighbor to the north.

More importantly, that turbulent, five decades long conflict often served to overshadow Cuba’s positive but often hidden relationship with Black people around the world. And while many whites in the U.S. are finally coming around, Africans, African-Americans and the African diaspora have had a sustained, uninterrupted and beneficial engagement with the Caribbean nation.

Although the Cold War was the ultimate source of tensions between the two nations, it is necessary to go back to Cuban independence to understand the full context of that tumultuous history. In 1898, the U.S. declared war on Spain and defeated the colonial power, resulting in Spain ceding its rights in Cuba, Puerto Rico and Guam to the U.S. In 1902, the U.S. granted independence to Cuba, but as a U.S. protectorate under the Platt Amendment, in which the Americans could lease the naval base at Guantanamo in perpetuity, and interfere in the island nation’s internal affairs. While the U.S. maintains Guantanamo to this day—with a detention camp for terror suspects—it relinquished its right to intervene in Cuban affairs in 1934.

With American dominance came the replacement of one form of colonial oppression with another. In the decades that followed, the U.S. invested in the Cuban economy and clamped down on uprisings. Between 1906 and 1909, the U.S. occupied Cuba, as President Tomas Estrada Palma resigned following a rebellion led by Jose Miguel Gomez, who subsequently was elected the new president. The U.S. led the brutal 1912 crackdown on El Partido de Independiente de Color (PIC) or the Independent Party of Color, resulting in the slaughter of 6,000 Black people and the destruction of the movement. PIC was the first 20th century Black political party in the hemisphere, and consisted of Black Cuban war veterans who resisted the American-imposed Jim Crow system of racial segregation.

The Cuban revolution became a turning point. Fidel Castro waged an unsuccessful revolt against the regime of President General Fulgencio Batista in 1953. The U.S. supported Castro in 1958 and withdrew military assistance to Batista. On January 1, 1959, Castro overthrew Batista, landing in Havana with a guerrilla army of 9,000. With U.S. support for the new Cuban regime came concerns about its leftist orientation. After three months in power, Castro visited the U.S. and met with Vice President Richard Nixon. Further, Castro met with Malcolm X during the Cuban leader’s visit to New York to address the United Nations General Assembly. In a show of solidarity with Black Americans, Castro stayed at Harlem’s Theresa Hotel.

Meanwhile, with the early 1960s came substantial changes in U.S.-Cuba relations, and American attempts to overthrow the Cuban government. Castro seized private land in 1960, nationalized hundreds of private businesses—including all U.S. companies—and imposed huge taxes on U.S. products. In response, President Dwight D. Eisenhower’s administration imposed a trade embargo on Cuba and ended diplomatic relations. The next year, the C.I.A. orchestrated a failed attempt to topple Castro using Cuban exiles through the Bay of Pigs, followed by Operation Mongoose, which included at least five plans to assassinate the Cuban leader between 1961 and 1963.

Castro, fearing a U.S. invasion, allowed the Soviet Union to build a missile base on the island. When President John F. Kennedy leaked photos of the nuclear missile silos in 1962, it triggered a standoff between the two superpowers known as the Cuban Missile Crisis. The USSR agreed to withdraw the missiles, and in exchange, the U.S. removed its missiles from Turkey.

Also that year, the Kennedy administration imposed a full economic embargo on Cuba, including travel and trade. According to the Cuban government and the Council on Foreign Relations, Cuba suffered an extreme economic toll, losing $1.126 trillion over the following 50 years.

In 1980, amid hard economic times due to the U.S.-imposed sanctions, Castro agreed to the Mariel boatlift, which led to the emigration of approximately 125,000 Cubans to the U.S. through Mariel Harbor—including a 22,000 people Castro reportedly released from prisons and mental hospitals. America tightened the economic screws on Cuba in the 1990s by strengthening the embargo twice, in 1992 and in 1996 with the Helms-Burton Act, making the embargo permanent in response to Cuba shooting down two civilian U.S. airplanes.

Subsequent administrations and Congresses both relaxed and tightened restrictions. President Barack Obama was elected in 2008 with an intent to relax restrictions and open relations with Cuba, amid polls showing a majority of Cuban Americans wanting an end to the embargo. Obama reversed the Bush policies regarding family travel and remittances to Cuba.  In addition, Obama allowed telecommunications companies to increase satellite and cell phone service in Cuba.

Over the years, as relations between the U.S. and Cuba froze and later thawed, Cuba maintained a vibrant, positive relationship with Black people in the U.S., Latin America, the Caribbean and Africa.  For example, Cuba enabled the liberation of African nations from European colonial oppression.  A prominent example was the intervention of 36,000 Cuban soldiers in Angola to push back the incursion of the South African army in 1975.  The Cuban victory against the white giant of apartheid was a victory for Africans in achieving their freedom.

Nelson Mandela traveled to Cuba in 1991 to thank Castro and the Cuban people for their role in the fight against apartheid and colonialism in southern Africa.

“In Africa we are used to being victims of countries that want to take from us our territory or overthrow our sovereignty. In African history there is not another instance where another people has stood up for one of ours. We also acknowledge that the action was carried out by the masses in Cuba and that those who fought and died in Angola are only a small portion of those who volunteered to go,” Mandela said.

“To the Cuban people internationalism is not only a word but something which they have put into practice for the benefit of large sectors of mankind. We know that the Cuban forces were ready to retreat after driving back the invasion in 1975 but the continued aggressions of Pretoria did not allow them to do so,” he added. “Your presence there and the reinforcements sent for the battle of Cuito Cuanavale has a historical meaning. The decisive defeat of the racist army in Cuito Cuanavale was a victory for all Africa. This victory in Cuito Cuanavale is what made it possible for Angola to enjoy peace and establish its own sovereignty. The defeat of the racist army made it possible for the people of Namibia to achieve their independence,” Mandela said. “The decisive defeat of the aggressive apartheid forces [in Angola] destroyed the myth of the invincibility of the white oppressor,” Mandela said. “The defeat of the apartheid army served as an inspiration to the struggling people of South Africa.”

Another example is Jamaica, which established ties with Cuba in 1972 under Prime Minister Michael Manley, to the dismay of Washington.  As National Public Radio reported in December 2014, “In the late 1970s and early 1980s, Jamaica saw an increase in the numbers of Cubans living and working on the island as a result of Manley’s openness in dealing with the Castro government. Thanks to Cuba’s largesse, schools were built in the rural areas of Jamaica.”  The report added, “Community health clinics were constructed too, so poor Jamaicans no longer had to travel half a day or more to the nearest doctor. Cuban nurses, doctors and agricultural specialists worked alongside their Jamaican counterparts, while many young Jamaicans went to Cuba to study medicine, science and engineering.”

In addition, Jamaica helped influence the new U.S. position on Cuba. In April, speaking at a gathering of Caribbean leaders in Kingston, President Obama announced his decision to remove Cuba from the U.S. State Department’s list of state sponsors of terrorism, leading to restoration of diplomatic ties and the reopening of their respective embassies in Washington and Havana.  Jamaica is now poised to increase investment in its Caribbean neighbor and ally.

Further, Cuba provided  safe haven for African-American freedom fighters.  Assata Shakur and a number of other members of the Black Panther Party and political prisoners fled to Cuba to escape the war waged on Black liberation groups by J. Edgar Hoover, the FBI chief who sought to destroy Black nationalist leadership and civil rights groups through the COINTELPRO program.

It should also be noted that a monument to the Rev. Dr. Martin Luther King exists in Havana, alongside a memorial to Malcolm X, demonstrating the longstanding Cuban commitment to the liberation struggles of Black people.