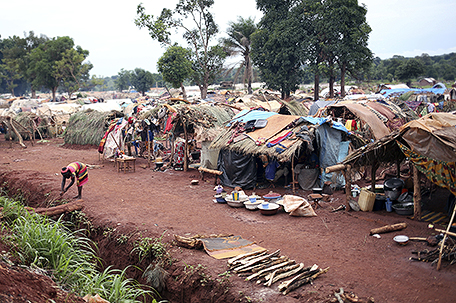 ABOVE PHOTO: A makeshift camp set outside Bria, Central African Republic. The United Nations says about 300 people have been killed and 200 wounded in the past two weeks alone in Bria and a handful of other towns. The U.N. humanitarian agency said the unprecedented violence emptied Bria of its population, sending an “uninterrupted stream” of residents toward makeshift camps. (AP Photo/Cassandra Vinograd)

DAKAR, Senegal –Rebels in a volatile region of Central African Republic are raping women and killing their male relatives in a “horrific surge’’ of violence that is now clearly along sectarian lines, Amnesty International warned Friday.

The human rights organization interviewed dozens of survivors in Basse-Kotto prefecture in the country’s east, where a rebel group known as the UPC has carried out waves of attacks. The rebels are considered an offshoot of the mostly Muslim rebel coalition known as Seleka that overthrew the longtime president in 2013.

While a period of relative stability allowed for Pope Francis to visit and for elections to be held, international observers now warn that Central African Republic is approaching the levels of violence seen at the height of the conflict in 2014.

One woman interviewed by Amnesty described a horrific attack in May. She said UPC fighters shot her husband in the legs when he tried to flee and then told the couple: “We’re going to do something to you Christians that won’t be forgotten for many generations.’’

One of the men raped her, while another raped her husband, all in front of their five children, Amnesty said. Then they fatally shot her husband in the head.

“Civilians are not accidental victims in this conflict; they are direct targets,’’ she said. “If the U.N.’s mandate in the Central African Republic is to mean anything, civilians must be better protected.’’

Central African Republic’s Muslims and Christians had lived in peace for generations, even intermarrying. However, the brutal reign of the Seleka rebel coalition fueled hatred that led to months of retaliatory attacks.

During Seleka’s rule, its fighters carried out scores of atrocities against Christian civilians. Seleka leaders disavowed the perpetrators as criminals. A new militia, Christian in name, though largely animist, soon arose to fight the Seleka.

Brutal vengeance was enacted against Muslim civilians, many of whom hated the Seleka themselves. Nearly the entire Muslim population of the capital, Bangui, fled to the north or to neighboring Chad and Cameroon.

The latest violence has been particularly worrisome because it has engulfed parts of the country that were largely untouched during the worst of the earlier conflict.