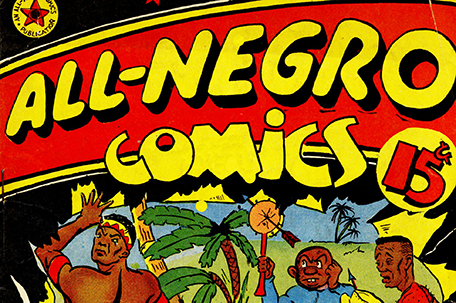 The All-Negro Comics was published in 1947. The comic book was a single-issue, small-press comic that represented the first known characters in the book. The magazine was written and drawn solely by Black writers and artist. 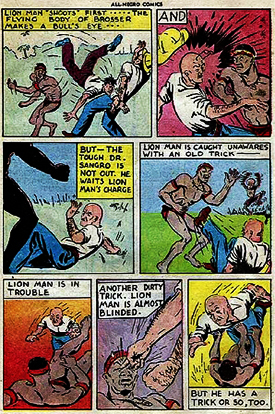 Orrin Cromwell Evans was born in 1902 in Steelton, Pennsylvania. He was the first black writer to cover general assignments for a mainstream white newspaper in the United States. After the initial paper he was writing for, Philadelphia Record, closed he partnered with former Record editor Harry T. Saylor, once sports editor for the Record, along with two other people. The four of them together founded their own company All-Negro Comics, Inc. Evans was the president. The only published and the only known issue of All-Negro Comics, which was a 48-page standard-sized comic book with a typical glossy color cover and newsprint interior. The book was copyrighted on July 15, 1947. The issue date was that of June 1947. The comic sold for 15 cents as oppose to the price of other comic books during that time which was 10 cents.

“The comic’s distribution are unknown, and as one cultural historian notes of the era, while there were a few heroic images of blacks created by blacks, such as the Jive Gray comic strip and All-Negro Comics, these images did not circulate outside of pre-civil rights segregated black communities. The Official Overstreet Comic Book Price Guide, a standard reference, considers the single issue rare and notes, Seldom found in fine or mint condition; many copies have brown pages.” 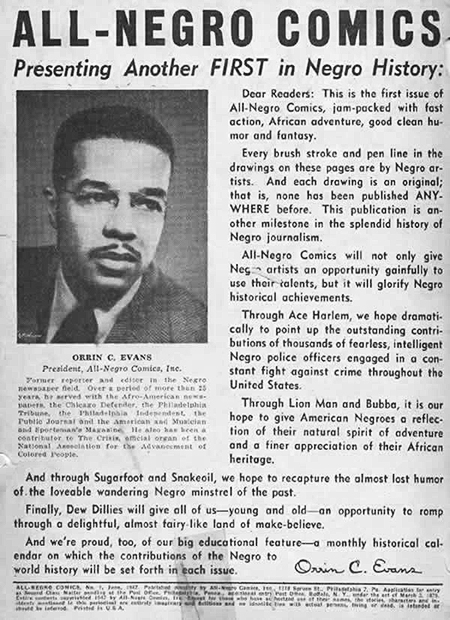 In 1947, Time magazine called the All-Negro Comics “the first to be drawn by Negro artists and peopled entirely by Negro characters.” In describing lead feature “Ace Harlem”, it said, “The villains were a couple of zoot-suited, jive-talking Negro muggers, whose presence in anyone else’s comics might have brought up complaints of racial ‘distortion.’ Since it was all in the family, Evans thought no Negro readers would mind.”

Some of the contents of the magazine included:

“The Little Dew Dillies”, a children’s feature starring cherub-like creatures only babies can see and talk to, drawn by Cooper

“Lion Man”, drawn by George J. Evans Jr., a college-educated #African American sent by the United Nations on a mission to a uranium deposit on Africa’s Gold Coast, where he adopted the mischievous orphan Bubba. One modern-day writer said “Lion Man” “wore the obligatory leotard costume of the comic hero”, though the comic’s cover and interior pages depict him in loin cloth.