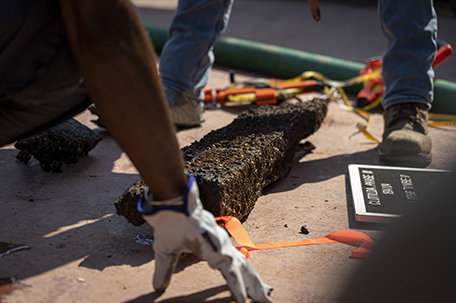 ABOVE PHOTO: Members of the team assessing the sunken wreckage of the last U.S. slave ship, the Clotilda, are shown looking at timbers from the schooner near Mobile, Ala., on Wednesday, May 4, 2022. The ship was scuttled after arriving on the Gulf Coast more than 160 years ago. (AP Photo/Daniel Fiore, Alabama Historical Commission)

MOBILE, Ala. — Keys to the past and the future of a community descended from enslaved Africans lie in a river bottom on Alabama’s Gulf Coast, where the remains of the last known U.S. slave ship rest a few miles from what’s left of the village built by the newly freed people after the Civil War.

Work performed this month will help answer a question residents of the area called Africatown USA are anxious to resolve: Can remnants of the slave ship Clotilda be retrieved from the water to both fill out details about their heritage and to serve as an attraction that might revitalize the place their ancestors built after emancipation?

A crew hired by the Alabama Historical Commission, working over 10 days ending Thursday, took fallen trees off the submerged remains of the ship, scooped muck out of the hull and retrieved displaced pieces to see what’s left of the Clotilda, which is described as the most intact slave ship ever found. The work will help determine what, if anything, can be done with the wreckage in years ahead. Some want a museum featuring the actual Clotilda, which was hired by a rich, white steamship captain on a bet to violate the U.S. ban on slave importation the year before the Confederacy was founded to preserve slavery and white supremacy in the South.

“The question is, give me a timetable. What’s the date for getting that boat out of that doggone water?” Africatown resident and activist Joe Womack asked team members during a public forum as work began. Nearby, a new “heritage house” that could display artifacts is under construction.

Others aren’t too concerned about the ship itself, which they view as only part of a larger story. The president of the Clotilda Descendants Association, Darron Patterson, said a few artifacts and a replica would be just fine for telling the tale of the 110 African captives and how their lives add to the narrative of slavery and the United States.

“Once those people came out of that cargo hold and grew up into men and women, they produced Africatown,” said Patterson, whose great-great grandfather, Pollee Allen, was among the captives. “And we, as the descendants, want to be sure that that legacy lives on.”

The Clotilda was the last ship known to transport African captives to the American South for enslavement. It departed Mobile decades after Congress outlawed the slave trade, on a clandestine trip funded by Timothy Meaher, whose descendants still own millions of dollars’ worth of land around Mobile.

The Clotilda’s captain, William Foster, transferred his cargo of women, men and children off the ship once it arrived in Mobile and set fire to the vessel to hide evidence of the illegal journey. But most of Clotilda didn’t catch fire, and as much as three-quarters of the ship remains in the Mobile River, which empties into Mobile Bay.

After the war ended, a group of the Africans settled north of Mobile in a place that came to be called Africatown USA. With Meaher refusing to give them land, they purchased property and started a thriving community that resembled the Africa of their memories. A few thousand people still live in the area, which is now surrounded by heavy industry and fell into disrepair in recent decades.Working from a barge topped with a crane, divers felt their way through murky water to determine the condition of the ship’s wreckage, which was an unidentified hazard on navigation charts before being identified as Clotilda in 2019. Workers have pulled up some barnacle-encrusted timbers from the ship, roughly 90 feet in length, for testing and documentation; most will be returned to the river.

Whether Clotilda could ever be raised — an operation that could cost tens of millions of dollars — depends on multiple factors including the condition of the wood, the stability of the wreck and the river environment around it, said James Delgado, a maritime archaeologist with SEARCH Inc.

A final report including a detailed, subsequent analysis will take a while, he said. But the wreck, in as much as 10 feet of water, is remarkably good shape because it’s been encased for decades in protective mud that conceivably could hold traces of DNA from captives, officials say.

“(It’s) open, broken, burned and yet still intact and so intact, at least as an archeological site, that it is the best-preserved example of the many thousands of slave ships that brought people from Africa to the Americas,” said Delgado.

The descendants of the African captives will play a “huge role” in deciding what to do with the wreck, said Stacye Hathorn, Alabama’s state archaeologist.

“At every stage, we’ve talked with the community first,” she said.

Once experts determine what can be done with the ship from a scientific and engineering standpoint, Clotilda descendants could have a variety of options to consider for the Africatown area.

Some envision a major historical attraction focused on the trans-Atlantic slave trade, others a memorial akin to the monument to lynching victims that opened in 2018 in Montgomery, about 170 miles to the northeast. Some want to rebuild Africatown, which once had modest homes with gardens and multiple businesses.

Joycelyn Davis, a sixth-generation granddaughter of African captive Charlie Lewis, helped found the Clotilda Descendants Association. She said there’s no clear consensus on what to do with Clotilda if it can be raised, or with artifacts taken off the wreck.

Personally, she’s most interested in the people who endured a tortuous journey across the Atlantic Ocean and what their legacy could mean to descendants today in terms of improving their lives.

“I’ve always said that it’s not about the ship, it’s about the people,” said Davis.